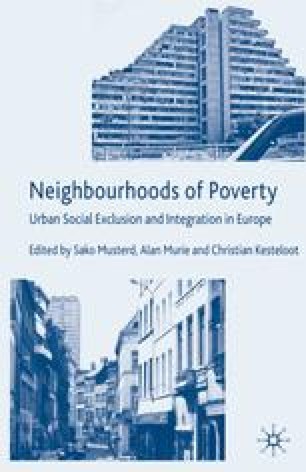 At the beginning of the 1990s, the review of Jenks and Mayer (1990) on neighbourhood effects concluded that ‘no general pattern of neighbourhood effects could yet be found. The empirical evidence [wrote the authors] is contradictory and sometimes thin in the areas of educational attainment, cognitive skills, crime, labour market outcomes.’ Since that review however, much research has been completed that provides some evidence for neighbourhood effects in those fields, using statistical data and sophisticated statistical models, even though it is not always clear which mechanisms are at work (see Brooks-Gunn et al., 1993; Case and Katz, 1991; Leventhal and Brooks-Gunn, 2003). Also important to note, is that many researchers found that in comparison with family characteristics, neighbourhood effects have a negligible impact. Nevertheless, it is nowadays widely accepted that neighbourhood effects exist, and more generally, that living in a specific place makes a difference in terms of social opportunities, and feelings of social exclusion. Most researchers in this field would probably agree that living in a disadvantaged neighbourhood enhances the conditions of exclusion.

Labour Market Coping Strategy Single Mother Neighbourhood Effect Social Support Network
These keywords were added by machine and not by the authors. This process is experimental and the keywords may be updated as the learning algorithm improves.

The Italian scientific research team of the URBEX project was co-ordinated by Yuri Kazepov. Paragraph 2 of this contribution is based on chapters 1 and 3 written by David Benassi in ‘Spatial Dimension of Urban Social Exclusion and Integration, the Case of Milan’ in A. Andreotti and Y. Kazepov (eds) 2002, URBEX series no 16. I would like to thank the author for permission to use this material.