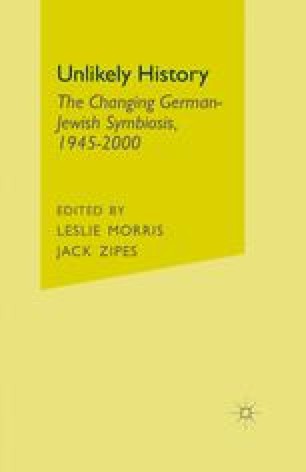 The Rift and Not the Symbiosis

When the past finally caught up with Tinchen Tannenbaum, 35 years had passed, years that she had taken the precaution of spending in bed. She lived in an old people’s home; peace reigned in Germany; and it was for her ears alone that the SA marched past the building. But she could not be persuaded of the truth of that. She heard what she heard: And when Tinchen Tannen-baum’s blood spurts from the knife, it’ll be a better life. She was ignorant of the fact that she had changed the words of the song, which actually goes: And when the blood of the Jews spurts from the knife…. She had obviously taken that very personally then, and now she was once more waiting to be taken away, a fate that she had again and again escaped—with a lot of luck—at that time, a time she never spoke about. In a psychiatric clinic she returned to the present. She shared the room with a one-legged old woman who called herself “Frau Müller from the Eastern Territories.” Hardly had Mother and I entered the room than she would make a peremptory motion summoning us to her side: “Just come over here!” And when we ignored her because we already knew what was coming, she became imperious: “Come here, I say!” And when we ignored that too, the old woman pointed her finger accusingly at us: “What are you doing here? You don’t belong here!” And when we then left the room with Tinchen she called after us indignantly: “Are those German folk?”

Negative Symbiosis Mass Murderer German Culture Fellow Traveler Homeroom Teacher
These keywords were added by machine and not by the authors. This process is experimental and the keywords may be updated as the learning algorithm improves.

[This is the entire text of the keynote address for The Minnesota Forum on German Culture: The Changing German/Jewish Symbiosis 1945–2000 conference, held at the University of Minnesota, May 3–6, 2000]