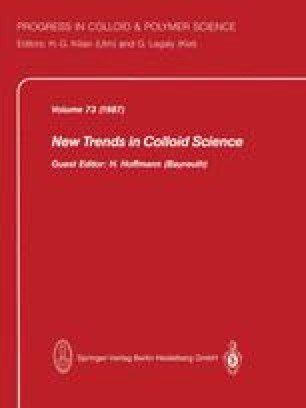 “New Trends in Colliod Science” contains the proceedings of the foundation meeting of the European Colloid and Interface Society (ECIS), October 1–3, 1986. Representatives from the major European groups working in this field contributed to the conference. The volume contains an up-to-date account of present developments in Colloid Science. The contributions cover a wide scope of subjects, and provide encouragement that structures and transport processes in dense colloidal systems can be understood on basic principles. The main subjects are include:

The static and dynamic properties of a dilute binary macroion mixture, where a small amount of large and highly charged spheres is immersed in a system of small spheres, are theoretically discussed. From light scattering experiments on such systems, the self-diffusion of the large spheres within the system of small spheres is essentially determined. Such systems have recently been studied by Phillies, using suspensions of highly charged polystyrene spheres. Modelling the elements of the memory function matrix by single exponentials, relating the k-dependent amplitudes and relaxation rates to the moments of the one-particle propagators, compact analytic expressions are derived for the normalized mean squared displacements and long-time self-diffusion coefficients. The moments are calculated from a generalized Smoluchowski equation and are given by integrals over the static correlation functions. Using the so-called two-component macrofluid model to calculate the static correlation functions, analytic expressions of the static partial total correlation functions in k-space are derived within the mean-spherical approximation for the binary mixture. Because of the strong dilution of the mixture, a rescaling procedure has to be used. This rescaling procedure is a simple generalization of that given by Hansen and Hayter for the one-component macroion fluid. Comparison of the theoretically calculated long-time self-diffusion of the large spheres with the experimental results of Phillies was quite satisfactory. Also, calculations of the two self-diffusion coefficients as functions of the diameter ratio and salt concentration have been performed, as well as of the normalized mean squared displacements.