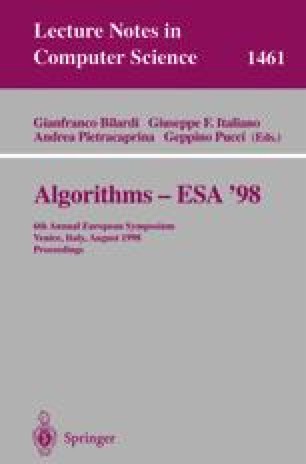 Matching Medical Students to Pairs of Hospitals: A New Variation on a Well-known Theme

The National Resident Matching Program in the U.S. provides one of the most successful applications of an algorithmic matching process. Under this scheme, graduating medical students are allocated to hospitals, taking into account the ordered preferences of both students and hospitals, so that the resulting matching is stable in a precise technical sense. Variants of this problem arise elsewhere. For example, in the United Kingdom, the students/hospitals problem is more complicated, primarily because students must take on two positions in their pre-registration year, namely a medical post and a surgical post. Hence there is a need for a matching process that assigns each student to one medical and one surgical unit, taking into account varying numbers of posts in the two half years, and students’ seasonal preferences, as well as the basic preferences of students and hospital units for each other.

This paper describes an algorithmic solution to this new variation on an old theme that uses network flow and graph theoretic methods as well as the traditional stable matching algorithm. The approach described has been implemented and will soon come into use as a centralised matching scheme in Scotland.

Medical Student Surgical Unit Stable Match Medical Post Medical Unit
These keywords were added by machine and not by the authors. This process is experimental and the keywords may be updated as the learning algorithm improves.
This is a preview of subscription content, log in to check access.