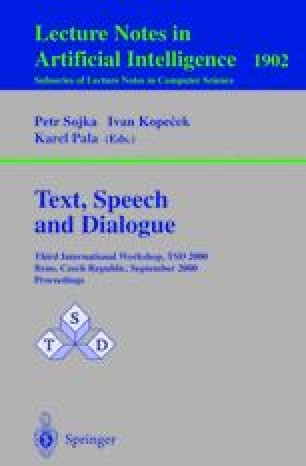 In this paper an approach to speaker identification based on an estimation of parameters of a linear speech-production model is presented. The estimation is based on the discrete Kalman estimator. It is generally supposed that the vocal tract can be modelled by a system with constant parameters over short intervals. Taking this assumption into account, we can derive a special form of the discrete Kalman estimator for the model of speech production. The parameters of the vocal tract model obtained by the above mentioned Kalman estimation are then used to compute a new type of cepstral coefficients which we call Kalman cepstral coefficients (KCCs). These coefficients were used in text-independent speaker identification experiments based on discrete vector quantisation. Achieved results were then compared with results obtained by using the LPC-derived cepstral coefficients (LPCCs). The experiments were performed in a closed group of 591 speakers (312 male, 279 female).

Speech Signal Speech Production Vocal Tract Speaker Recognition Speaker Identification
These keywords were added by machine and not by the authors. This process is experimental and the keywords may be updated as the learning algorithm improves.