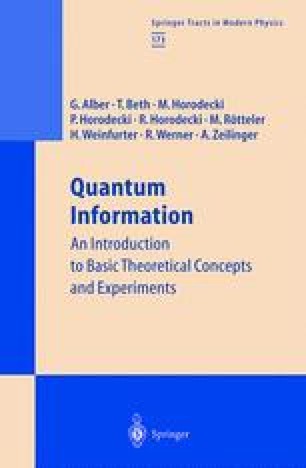 Quantum entanglement lies at the heart of the new field of quantum communication and computation. For a long time, entanglement was seen just as one of those fancy features which make quantum mechanics so counterintuitive. But recently, quantum information theory has shown the tremendous importance of quantum correlations for the formulation of new methods of information transfer and for algorithms exploiting the capabilities of quantum computers. While the latter needs entanglement between a large number of quantum systems, the basic quantum communication schemes rely only on entanglement between the members of a pair of particles, directly pointing to a possible realization of such schemes by means of correlated photon pairs such as those produced by parametric down-conversion.

Entangle State Beam Splitter Bell State Quantum Communication Quantum Cryptography
These keywords were added by machine and not by the authors. This process is experimental and the keywords may be updated as the learning algorithm improves.
This is a preview of subscription content, log in to check access.