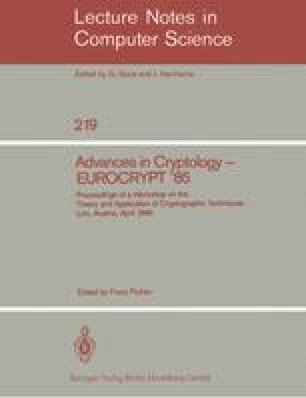 The Contribution of E.B. Fleissner and A. Figl for Today’s Cryptography

About two and a half thousands of years ago the antique philosopher HERACLIT has stated that “The war is the father of all things” . He was right also for cryptography till to the recent past . Now since some decades business and computer application are perhaps a stronger propulsion for cryptography than military and diplomatic requirements. Therefore on should not wonder that the central figures mentioned here living near the turn of this century were both officers. Eduard 8. FLEISSNER with the full name Eduard Freiherr (baron) von FLEISSNER von WOSTRDWITZ, son of an Austrian cavalry captain was born on January 25, 1825 in Lemberg, today capital of Ukrainian Soviet Socialist Republic , at his time part of the Austrian Monarchy. After his education as officer in the famous Theresian Military Academy in Wiener Neustadt (50 km south of Vienna), founded 1752 by the empress Maria Theresia and still even now the academy for Austria officers, he became second lieutenant of the Imperial-Royal Austrian Army in 1813. He advanced continuously, was finally appointed commander of a school for brigade commanders in 1870 and additionally division commander in 1872. In 187b heretired and moved in 1880 to Vienna where he died on April 29, 1888.