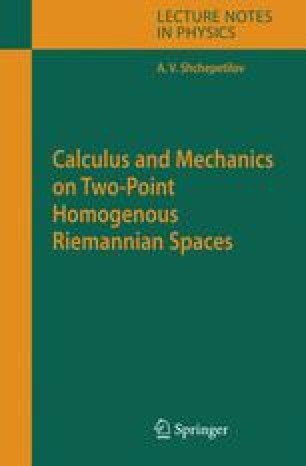 The main characteristic for the system of two classical particles on a Riemannian space M is the distance between them. If the space M is homogeneous and isotropic, this distance is the only geometric invariant for a position of particles in M. This motivates the separation of degrees of freedom into two types. The first type contains only one radial degree of freedom. The second one contains other degrees of freedom, which correspond to the isometry group. Such separation should appear itself also in studying the two-body quantum Hamiltonian (or the classical Hamiltonian function) and in an expansion of the corresponding Hilbert space.

Isometry Group Stationary Subgroup Compact Homogeneous Space Unit Sphere Bundle Radial Degree
These keywords were added by machine and not by the authors. This process is experimental and the keywords may be updated as the learning algorithm improves.
Download to read the full chapter text