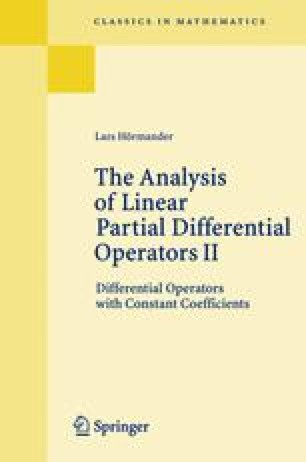 Chapter
Part of the Classics in Mathematics book series

After a discussion of local existence theorems in Sections 13.2 and 13.3 and of hypoellipticity in Section 13.4 we turn in Section 13.5 to global existence questions. It turns out that solution exist globally if and only if the adjoint operator and its localizations at infinity are injective. When the coefficients are real analytic this is always true by Holmgren’s uniqueness theorem (see Section 8.6). However, no such uniqueness theorem is valid when the coefficients are just in C ∞ . In fact, we construct in Section 13.6 a number of examples of non-uniqueness for the Cauchy problem including an elliptic equation which has a non-trivial solution of compact support.

Cauchy Problem Differential Operator Existence Theorem Constant Coefficient Infinite Order
These keywords were added by machine and not by the authors. This process is experimental and the keywords may be updated as the learning algorithm improves.
This is a preview of subscription content, log in to check access.