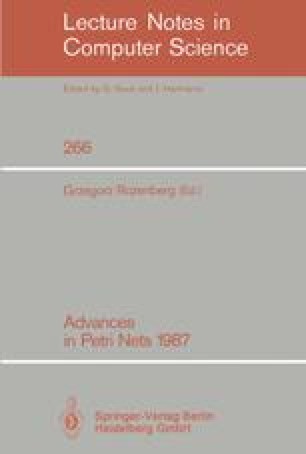 European Workshop on Applications and Theory in Petri Nets

Petri net models for the λ-calculus

In [Kluge & Schlütter 83] a Petri net model was presented for the reduction of expressions in a λ-calculus like language. The λ-plan model outlined here, tries to deal with two problems left open by the authors of that paper namely that they model only applicative order string-reduction and do not allow higher order functions. We will try to solve this by using a two-level approach.

In order to model the reduction of a given λ-term, an execution plan for the reduction of the term is generated. Execution of that λ-plan implies two levels of activity. On the control-flow level, transitions send each other messages (tokens) in order to detect redexes. Once a redex has been found a local change is made to the data-flow level where the structure of the plan is transformed according to the reduction rules of λ-calculus.

Although this paper is concerned only with string-reduction, an extension of the model to incorporate graph-reduction is straightforward. The plan model can also be adapted to model other rewriting systems as well.

Normal Form Normal Order Reduction Rule Execution Plan Functional Language
These keywords were added by machine and not by the authors. This process is experimental and the keywords may be updated as the learning algorithm improves.
This is a preview of subscription content, log in to check access.