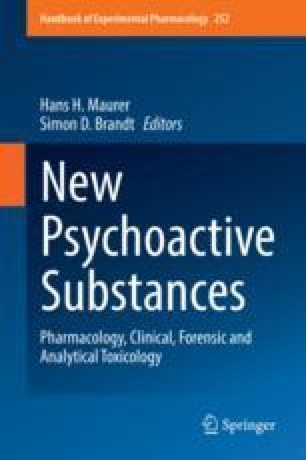 New psychoactive substances (NPS) are drugs that are not controlled by the United Nations international drug control conventions of 1961 and 1971 but that may pose similar threats to public health. Many of them are traded as “legal” replacements to controlled drugs such as cannabis, heroin, benzodiazepines, cocaine, amphetamines, and 3,4-methylenedioxymethamphetamine (MDMA). Driven by globalization, there has been a large increase in the availability and, subsequently, harms caused by these substances over the last decade in Europe. The European Monitoring Centre for Drugs and Drug Addiction (EMCDDA) is monitoring more than 670 NPS that have appeared on Europe’s drug market in the last 20 years, of which almost 90% have appeared in the last decade. While some recent policy responses have been successful in reducing availability and sales of these substances in some settings – such as “legal highs” and “research chemicals” sold openly in the high street and online – and there are signs that growth in the market is slowing, new challenges have emerged. This includes monitoring a growing number of highly potent substances – including 179 synthetic cannabinoid receptor agonists and 28 fentanils – that can pose a high risk of life-threatening poisoning to users and can cause explosive outbreaks. This chapter briefly traces the origins of NPS, provides an overview of the situation in Europe, and discusses the work of the EMCDDA as part of a legal framework of early warning, risk assessment, and control measures that allows the European Union to rapidly detect, assess, and respond to public health and social threats caused by these substances.

Parts of this chapter have been previously published in an EMCDDA report entitled “Fentanils and Synthetic Cannabinoids: Driving Greater Complexity into the Drug Situation – An Update from the EU Early Warning System (June 2018)” as well as a chapter entitled “Responding to New Psychoactive Substances in the European Union: Early Warning, Risk Assessment, and Control Measures” published in the book Chemical Health Threats: Assessing and Alerting, published by the Royal Chemistry Society, 2018 (ISBN: 978-1-78262-071-6).