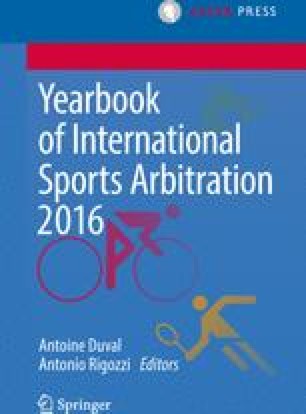 The purpose of the analysis of this recent CAS award is to show that sports institutions, such as the Lithuanian Football Federation (“LFF”) in this case, may exercise originality in the drafting of rules providing for “light” means of evidence. While practitioners in the sports law environment are rather used to coping with the burden of directly or circumstantially proving (or rebutting) the violations of rules giving rise to sanctions, the LFF Disciplinary Code sets forth the possibility of demonstrating that a match has been fixed on the mere basis of statistical data collected by the betting operators (the “data-based presumption”). The CAS has accepted and endorsed this rule as well as another disciplinary rule of the LFF, according to which, even if cannot be proven that players or clubs have been involved in match manipulation, the players’ suspicious behaviour during a given match, observed by experts or by the CAS Panel itself, results in a presumption of the players’ involvement in the match-fixing and, if such presumption is not rebutted, in their punishment (the “suspicion-based presumption”).

Jorge Ibarrola, LL.M. McGill, is a Swiss registered Attorney-at-Law, practicing as partner with the law firm Libra Law based in Lausanne, Switzerland.