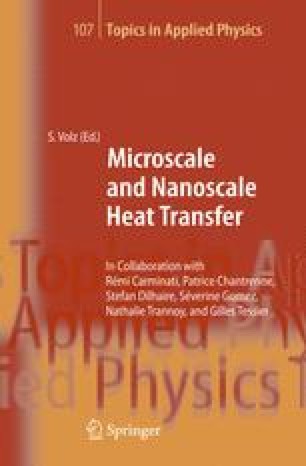 Heat transfer of radiative origin is treated classically by the transport equation of a phenomenological quantity called the specific intensity (see the Chapter on Radiative Transfer by Carminati in this volume). This quantity and its dynamical equation are based on a radiometric approach (incoherent addition of fluxes, geometrical optics). When the relevant distances become as small as the wavelength or less, such hypotheses are no longer valid. One must then go back to the more general ideas of electromagnetic theory.

In Sect. 2, we examine how a small dipolar sphere at temperature T will radiate in vacuum, and how transfer occurs between two such dipolar spheres at different temperatures. We then calculate the electromagnetic energy density near a surface at temperature T (Sect. 3). We shall see how this energy density is modified in the near field, particularly when the materials in place can carry surface waves. Finally, in Sect. 4, we investigate the near-field radiative transfer between two plane surfaces, bringing out the key role played once again by surface waves.