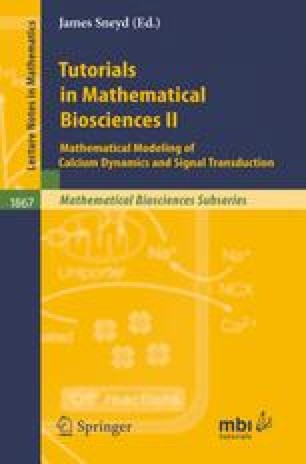 The synapse is the storehouse of memories, both short-term and long-term, and is the location at which learning takes place. There are trillions of synapses in the brain, and in many ways they are one of the fundamental building blocks of this extraordinary organ. As one might expect for such an important structure, the inner workings of the synapse are quite complex. This complexity, along with the small size of a typical synapse, poses many experimental challenges. It is for this reason that mathematical models and computer simulations of synaptic transmission have been used for more than two decades. Many of these models have focused on the presynaptic terminal, particularly on the role of Ca2+ in gating transmitter release (Parnas and Segel, 1981; Simon and Llinás, 1985; Fogelson and Zucker, 1985; Yamada and Zucker, 1992; Aharon et al., 1994; Heidelberger et al., 1994; Bertram et al., 1996; Naraghi and Neher, 1997; Bertram et al., 1999a; Tang et al., 2000; Matveev et al., 2002). The terminal is where neurotransmitters are released, and is the site of several forms of short-term plasticity, such as facilitation, augmentation, and depression (Zucker and Regehr, 2002). Mathematical modeling has been used to investigate the properties of various plasticity mechanisms, and to refine understanding of these mechanisms (Fogelson and Zucker, 1985; Yamada and Zucker, 1992; Bertram et al., 1996; Klingauf and Neher, 1997; Bertram and Sherman, 1998; Tang et al., 2000; Matveev et al., 2002). Importantly, modeling has in several cases been the motivation for new experiments (Zucker and Landò, 1986; Hochner et al., 1989; Kamiya and Zucker, 1994; Winslow et al., 1994; Tang et al., 2000). In this chapter, we describe some of the mathematical models that have been developed for transmitter release and presynaptic plasticity, and discuss how these models have shaped, and have been shaped by, experimental studies.

Synaptic Transmission Release Site Transmitter Release Presynaptic Terminal Synaptic Conductance
These keywords were added by machine and not by the authors. This process is experimental and the keywords may be updated as the learning algorithm improves.
This is a preview of subscription content, log in to check access.