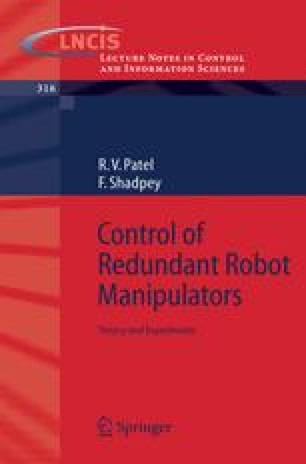 Robotic tasks mainly fall into two categories: Constrained and unconstrained motions. During the initial stages of development in robotics, most successful applications dealt with position control of unconstrained motion of robot manipulators. The nature of these tasks does not require a robot to come in contact with its environment (work piece). Spray painting is an example of such a task in which the robot brings a spray gun near the surface to be painted and then sweeps across the surface with a specified velocity. Another example is that of seam welding. In some applications, where a robot comes in contact with its environment (as in the case of material handling), precise control of the interaction with the object is not required. The problem that arises when using a position control scheme in a constrained motion is that the robot-environment interaction forces are treated as disturbances. The controller tries to reject these forces, and hence, gives rise to larger interaction forces. The consequences of this are saturation, instability, or even physical failure and damage to the robot and the environment. Whitney [94] gives a historical perspective on robot force control. Force control strategies have been mainly designed to use force feedback sensory information.

Force Control Obstacle Avoidance Impedance Control Additional Task Task Space
These keywords were added by machine and not by the authors. This process is experimental and the keywords may be updated as the learning algorithm improves.
This is a preview of subscription content, log in to check access.