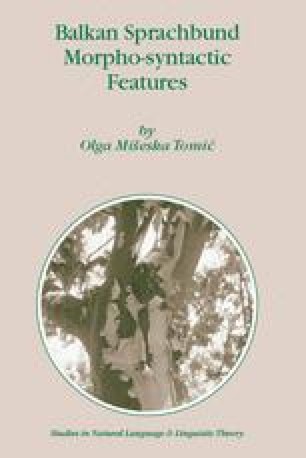 The most perspicuous and most widely discussed feature of the Balkan Sprachbund languages is the loss of the infinitive and its replacement by structurally comparable subjunctive constructions. It should, however, be pointed out that there is no uniformity in either the loss of the infinitive or its replacement by subjunctive constructions. The infinitive has been completely lost in Macedonian, Modern Greek and Arli Balkan Romani and almost completely in Bulgarian, Aromanian and the South-Eastern Serbian dialects. In Megleno-Romanian, it shows up in a limited number of quite clear whether the Indo-European infinitive was lost at one point and reinstituted atypically (with devices that are distinct from the common Indo-European devices) prior to the publication of the first Albanian written document – Buzuku’s Missal, published in 1555, or else the Albanian quasi-infinitival constructions are not related to infinitives at all (cf. Demiraj 1969:89; Joseph 1983).1

Main Clause Past Tense Form Conditional Sentence Intentional Verb Lexical Verb
These keywords were added by machine and not by the authors. This process is experimental and the keywords may be updated as the learning algorithm improves.
This is a preview of subscription content, log in to check access.