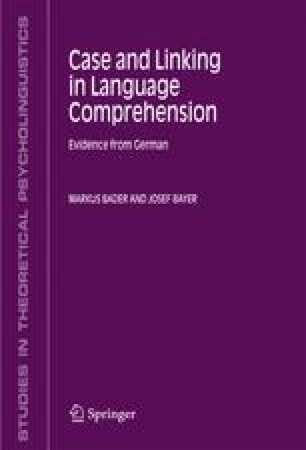 CASE AND LINKING IN LANGUAGE COMPREHENSION pp 49-85 | Cite as

WORD ORDER AND CASE IN GERMAN

This chapter presents the syntactic background for the chapters to come. We will concentrate on those aspects of German syntax that play a role in the experiments as well as in the theoretical argumentation about sentence parsing. The chapter will first develop a sketch of German clause structure and its rather free word order (in comparison with English). The chapter will then capitalize on two important aspects of the licensing of Case which build on the classical distinction between structural and inherent (or lexical) Case, but will take a closer look at Case morphology than is usually done. We will argue that the socalled “structural” Cases nominative and accusative are not positionally licensed by functional heads such as AgrS (for subject agreement) and AgrO (for object agreement), but agree with corresponding features of the inflected transitive verb under a local agreement relation. The so-called “inherent” Cases dative and (verbally selected) genitive cannot enjoy a similar formal agreement relation. They have to import their own functional structure into the derivation. We will show that Case morphology is the morphological exponent of this licensing, and that its syntactic side is a Kase Phrase (KP) which dominates DP/NP.

Word Order Argument Structure External Argument Functional Head Indirect Object
These keywords were added by machine and not by the authors. This process is experimental and the keywords may be updated as the learning algorithm improves.
This is a preview of subscription content, log in to check access.