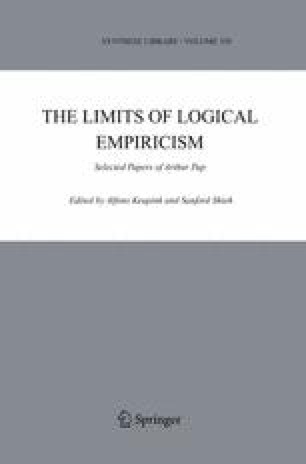 THE LIMITS OF LOGICAL EMPIRICISM pp 3-43 | Cite as

There are, of course, many styles of philosophizing; but it is sometimes illuminating to think of philosophers as divided into two broad types: the Socratic and the Platonic. The former are the critics, the ones who never cease questioning the grounds of accepted opinions and turning over the details of arguments; the latter are the systematizers, the ones who have a sweeping vision that they take more seriously than the details. On this division Arthur Pap is a Socratic philosopher. As he himself says in describing Semantics and Necessary Truth (Pap 1958c, cited in this Introduction as SNT), “It will hardly escape the reader’s notice that very few definitive conclusions are reached in this book, that perhaps more problems have been formulated than have been solved” (SNT, Preface, xiv). Although Pap was very much an analytic philosopher, a good part of his most philosophically rewarding work are critiques of two prominent strands of analytic philosophy in the 1940s and 1950s. One of these is logical positivism or logical empiricism, the movement stemming from the Vienna Circle of Moritz Schlick and Rudolf Carnap and the Berlin school of Hans Reichenbach, which dominated analytic philosophy, especially in the USA, from the end of World War II through most of the 1960s. The other is ordinary language philosophy, deriving from the work of Gilbert Ryle and the followers of Ludwig Wittgenstein,1 which played a significant and in certain ways oppositional role, in post-war British analytic philosophy until the end of the 1960s. There were many differences and disputes between positivism and ordinary language philosophy, yet in certain respects their central, as it were popular, ideas converged. In order to understand Pap’s work and appreciate its relevance to contemporary philosophy, it will be useful to begin with a brief sketch of some major preoccupations of the analytic philosophy of this period that included this convergence. The doctrines I will outline characterize logical empiricism and ordinary language philosophy as philosophical movements, and so should not be confused with the much more nuanced views of, e.g., Carnap and Wittgenstein.

Analytic Philosophy Linguistic Theory Logical Constant Open Concept Logical Empiricism
These keywords were added by machine and not by the authors. This process is experimental and the keywords may be updated as the learning algorithm improves.
This is a preview of subscription content, log in to check access.