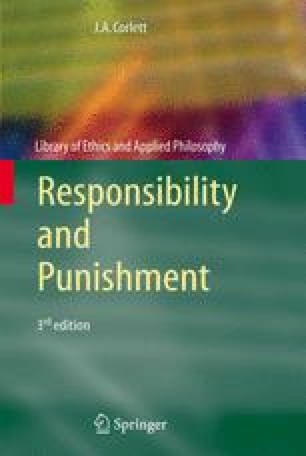 Responsibility And Punishment pp 107-130 | Cite as

Much has been made in recent philosophy of whether or not punishment is the state's duty, instead of being its mere right. However, it need not be shown by the retributivist that the state has a duty to punish. For retributivism itself does not entail such a view, though some versions of retributivism (e.g., Immanuel Kant's) espouse the claim that punishment is the perfect duty of the state. But as Jeffrie G. Murphy argues, all that needs to be shown by the retributivist (or by the utilitarian, if I am correct) is that the punishment of criminals is the state's right, i.e., that it is justified for the state to exercise hard treatment on duly convicted criminals if it so chooses.1 This is sufficient to ground both the institution of punishment as well as the practices of particular forms of punishment. The retributivist need not be committed to the position that each and every crime must be punished (a claim entailed by the view that the state has a perfect duty to punish offenders) in order to be justified in inflicting punishment on offenders. Instead, retributivists might argue, as I do,2 that not every crime must be punished, perhaps because of practical considerations of resource capability. This is not to say, however, that the state forgives and shows mercy or leniency towards crimes it does not punish; it simply chooses not to punish them because of its lack of sufficient resources, ceteris paribus.

Moral Responsibility Moral Duty Moral Virtue Causal Determinism Hard Treatment
These keywords were added by machine and not by the authors. This process is experimental and the keywords may be updated as the learning algorithm improves.
This is a preview of subscription content, log in to check access.