The Near-Surface Layer of the Ocean 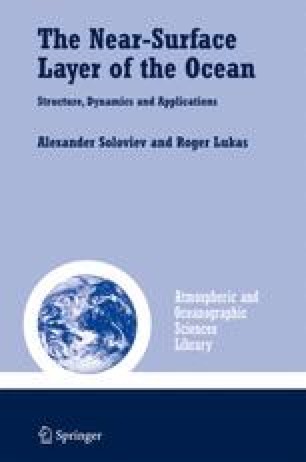 The main sources of turbulence in the near-surface layer of the ocean are breaking surface waves, shear, and convection. Upper ocean turbulence resulting from shear and convective instabilities may be substantially influenced by the diurnal cycle of solar radiation and by precipitation events. The shear that develops at the bottom of a shallow diurnal or rain-formed mixed layer can greatly increase the turbulence generation (though on relatively small scales) and thus the dissipation rate of turbulence. Below the mixed layer (i.e., in the pycnocline), turbulence decays due to the stabilizing effect of buoyancy forces. The dramatic effect of stratification is observed under low wind speed conditions, when the turbulence regime depends strongly on near-surface stratification, while the strong stratification is also the result of reduced turbulent mixing.

Surface Wave Turbulent Kinetic Energy Dissipation Rate Turbulent Boundary Layer Significant Wave Height
These keywords were added by machine and not by the authors. This process is experimental and the keywords may be updated as the learning algorithm improves.
This is a preview of subscription content, log in to check access.