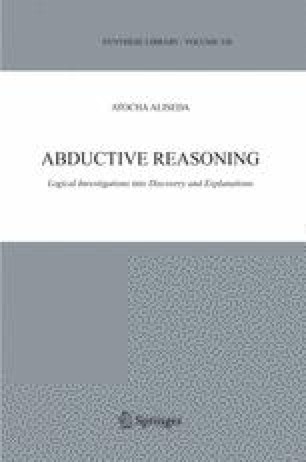 In the preceding overview chapter, we have seen how the notion of abduction arose in the last century out of philosophical reflection on the nature of human reasoning, as it interacts with patterns of explanation and discovery. Our analysis brought out a number of salient aspects to the abductive process, which we shall elaborate in a number of successive chapters. For a start, abduction may be viewed as a kind of logical inference and that is how we will approach it in the analysis to follow here. Evidently, though, as we have already pointed out, it is not standard logical inference, and that for a number of reasons. Intuitively, abduction runs in a backward direction, rather than the forward one of standard inference, and moreover, being subject to revision, it exhibits non-standard nonmonotonic features (abductive conclusions may have to be retracted in the light of further evidence), that are more familiar from the literature on non-standard forms of reasoning in artificial intelligence. Therefore, we will discuss abduction as a broader notion of consequence in the latter sense, using some general methods that have been developed already for non-monotonic and dynamic logics, such as systematic classification in terms of structural rules. This is not a mere technical convenience. Describing abduction in an abstract general way makes it comparable to better-studied styles of inference, thereby increasing our understanding of its contribution to the wider area of what may be called ‘natural reasoning‘. To be sure, in this chapter we propose a logical characterization of what we have called an (abductive) explanatory argument, in order to make explicit that the inference is explanatory (and thus forward chained), while keeping in mind it aims to characterize the conditions for an abductive explanation to be part of this inference (cf. chapter 2).

Classical Logic Logical System Logical Inference Structural Rule Background Theory
These keywords were added by machine and not by the authors. This process is experimental and the keywords may be updated as the learning algorithm improves.
This is a preview of subscription content, log in to check access.