Applications of Simulation Methods in Environmental and Resource Economics 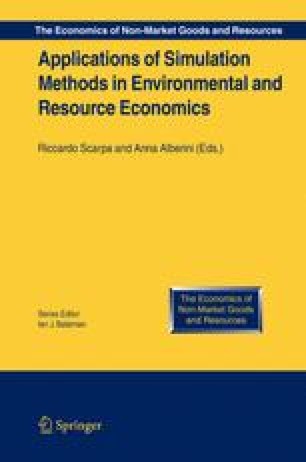 Chapter
Part of the The Economics of Non-Market Goods and Resources book series (ENGO, volume 6)

Research in the area of discrete choice modelling can be split into two broad categories; applications accounting for the prevalence of unobserved inter-alternative correlation, and applications concerned with the representation of random inter-agent taste heterogeneity. The difference between these two is however not as clear-cut as this division might suggest, and there is in fact a high risk of confounding between the two phenomena. In this article, we investigate the potential of mixed Generalised Extreme Value (GEV) models to simultaneously account for the two phenomena, using a Stated Preference (SP) dataset for mode-choice in Switzerland. Initial results using more basic modelling techniques reveal the presence of both correlation and random taste heterogeneity. The subsequent use of mixed GEV models on this dataset leads to important gains in performance over the use of the more basic models. However, the results also show that, by simultaneously accounting for correlation and random taste heterogeneity, the scope to retrieve the individual phenomena is reduced. This shows that a failure to account for the potential impacts of either of the two phenomena can lead to erroneous conclusions about the existence of the other phenomenon. This is a strong indication that the use of mixed GEV models to jointly explain random taste heterogeneity and inter-alternative correlation in a common modelling framework should be encouraged in the case where the nature of the error-structure is not clear a priori.