Metals in Society and in the Environment 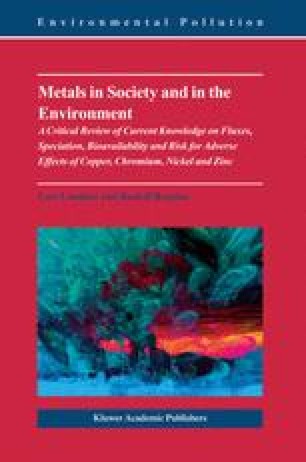 Significant advances have been made in recent years to improve our understanding of the mechanisms by which trace metals exert toxic effects on aquatic life. Moreover, much has been learned about how site-specific differences in water quality can affect metal speciation, and that it is the metal species that affects its bioavailability and toxicity to aquatic life.

It has repeatedly been shown that differences in the free metal ion activity (in the case of copper, Cu2+) of the test medium can explain a substantial part (but not all) of the observed toxicity variability. But also other Cu forms (like complexes with OH and CO3 ions and organic metabolites) have the potential to contribute to Cu toxicity. It is also assumed that competition between Ca2+, Mg2+, Na+ and H+ ions and Cu ions for binding sites at the organism-water interface may result in a decreased toxicity of the free cupric ion. Analogous phenomena have been shown to exist for Zn. Recently developed “Biotic Ligand Models” (BLMs) include all these aspects and are, therefore, gaining increased interest in the scientific as well as the regulatory community. In fact, the BLM concept, now developed for Cu, Ni, silver (Ag) and Zn, is considered as the currently most practical technique to assess the ecotoxicity of metals on a site-specific basis. Therefore, the BLM concept is now being approved in the EU.

A basic assumption of the BLM is that metal toxicity occurs as the result of metal ions reacting with binding sites at the organism-water interface, represented as a metal-biotic ligand (metal-BL) complex. The concentration of this metal-BL complex directly determines the magnitude of the toxic effect, independent of the physical-chemical characteristics of the test medium. Hence, the acute toxicity of a trace metal to an organism can be calculated when metal speciation, the activity of each cation in solution, and the stability constant for each cation to the BL(s) for the organism are known.

BLMs were then rapidly developed for fish (rainbow trout, fathead minnow) and crustaceans to predict acute toxicity of Cu, Ag and Zn. Later on, the BLM approach was shown to be applicable also to the assessment of chronic toxicity to the same organism groups as well as to green algae. It was furthermore demonstrated that concentrations of Cu and Ni in the gills of fathead minnows were constant predictors of acute toxicity of these metals to the fish, although water hardness varied up to 10-fold. In contrast, concentrations of total Cu and Ni in the water or free-ion activities of these metals could not be used as good toxicity predictors.

The “critical BL concentration”, i.e. the amount of metal bound to the fish gill that caused 50% mortality at 96 h, was determined as 250 nmol Ni per g wet weight (ww) and, for copper, about 12 nmol/g ww. Other researchers provided only slightly modified values of the “critical BL concentrations” in gills of fathead minnows: for Cu-10 nmol/g, for Ag-17 nmol/g and for Ni-240 nmol/g ww. The corresponding value for Cu in gills of Daphnia magna was about 12 nmol/g and for Ag-2.3 nmol/g.

Later work concentrated on the problem of predicting chronic toxicity on the basis of the BLM. It was shown that the BLMs for rainbow trout, Daphnia magna and a green alga were able to significantly reduce the variation in effect concentrations, i.e. the chronic toxicity of Cu and Zn to these organisms was generally predicted within a factor of two from the observed values, both when using laboratory waters and waters collected in the field. It was also demonstrated that dietary uptake of Cu in daphnids did not enhance the chronic toxicity of waterborne Cu.

Rainbow Trout Chronic Toxicity Fathead Minnow Copper Toxicity Fish Gill
These keywords were added by machine and not by the authors. This process is experimental and the keywords may be updated as the learning algorithm improves.
This is a preview of subscription content, log in to check access.