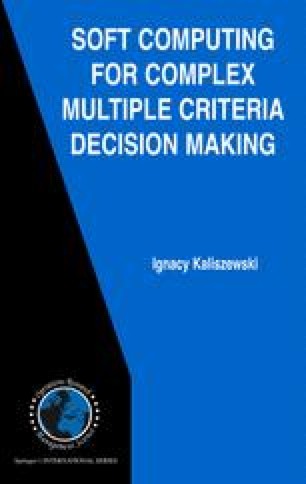 There are clear advantages of viewing interactive MCDM methods from the perspective of the Universal Interface. With the Universal Interface in place presenting interactive MCDM principles and merits becomes a much simpler task than it was before. Moreover, interactive MCDM issues can be addressed separately by two groups: in the methodological tier by actual DMs and decision theory researchers, and in the technical tier by research and technical persons from areas of decision theory, computer science, mathematics, software developing, and computing service providing.

Method Class Soft Computing Decision Control Half Line Optimization Engine
These keywords were added by machine and not by the authors. This process is experimental and the keywords may be updated as the learning algorithm improves.
This is a preview of subscription content, log in to check access.