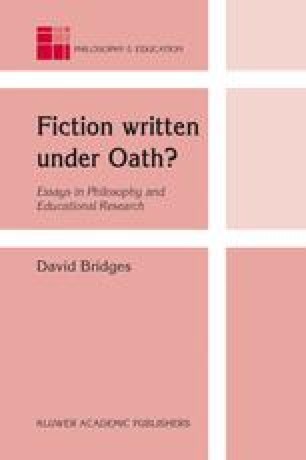 ‘Nothing about us without us’: the ethics of outsider research

The relationship between researcher and researched has become a matter of intense controversy in a number of apparently very different contexts. These have, nevertheless, certain key features in common: they are all contexts in which groups of people who define themselves ‘disempowered’59 resist the ‘intrusions’ of researchers from outside their own community or at least the current terms of such intrusion. In the recent literature these groups have included: women, people with disabilities, gays and lesbians and indigenous people in societies dominated by white former colonialists60. Cases have been made out of, and on behalf of, each of these communities that are critical of research into their experience conducted by people from outside their communities. It is argued, a fortiori, that research into this experience should be conducted by people from within the community. ‘Nothing about us without us’ is, for example, the striking slogan that has emerged from the disability camp (see Charlton 1998), while in New Zealand there is a growing body of Maori educational researchers whose motto might be encapsulated as ‘by Maori, in Maori, for Maori’ (Marshall and Martin 2000 — see also on this Marshall and Peters 1989, Peters, Para and Marshall 1989 and Marshall and Peters 1995). In this chapter I shall explore more closely the nature of these arguments and the ethical and epistemological costs of sustaining them. I shall argue for the importance of retaining a role for outsider research in such communities, though one which must operate under appropriate ethical constraints and on the basis of proper human respect and care.

In treating these together I fall into something close to what one writer describes as ‘the new feminist mantra (of) integrated analysis of race, class, gender, ethnicity, sexuality’ (Patai 1994: 61). This arises simply from the observation that the issues are defined and discussed in very much the same terms across these different spheres of activism and enquiry.