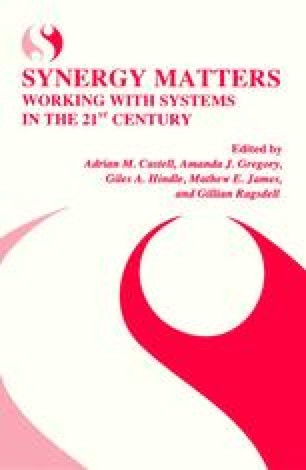 Views of a problem from a top down perspective are always incomplete. Making sense of the world inevitably means generalisation, and the exclusion of elements considered irrelevant to the ‘big picture’. Whilst this approach has been successful in tightly coupled organisational structures, their limitations are exposed in loosely coupled, networked relationships. The Bottom up view is an aid in overcoming these limitations. In fact, it is valuable in providing a different perspective even in highly structured systems.

The bottom up design approach implies that control mechanisms are at the lowest levels, and responsibilities for actions are at the system element level. This is contrary to conventional management practice, where responsibilities for actions and consequences tend to be placed at a high level. For example, investigating a system failure in bottom up mode would look for causes at the element level, or more precisely, at their interactions. The top down mode would tend to look at the overall system, and would put ‘blam’ on the system itself and how it functions, rather than emergent properties of system element interactions.

Finally, the methodology offered for consideration in this paper is an attempt to formalise an approach using this viewpoint. Constructive criticisms are invited about it.

Previous Stage Emergent Property Problem Space System Element System Thinking
These keywords were added by machine and not by the authors. This process is experimental and the keywords may be updated as the learning algorithm improves.
This is a preview of subscription content, log in to check access.