Performance Analysis of Multichannel and Multi-Traffic on Wireless Communication Networks 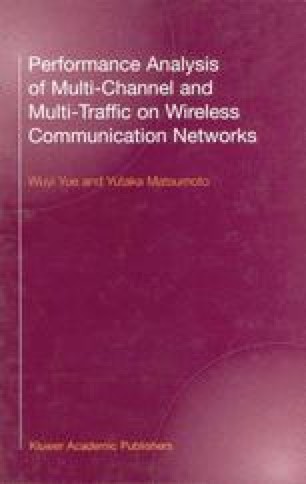 In this chapter, we have analyzed the performance of the multichannel packet radio system with capture where the slotted ALOHA protocol was used to transmit packets on the channel. The performance measures have been calculated under both IFT and DFT protocols. Numerical results showed that channel utilization, packet delay and other important performance measures can be improved by employing capture.

In a multichannel system having fixed total bandwidth, depending on parameter u and channel number M, the improved system performance such as the channel utilization and average packet delay has been obtained. We have seen the quantitative capture restriction u is a very important parameter and increasing u can improve the performance of the system. There are several practical ways to increase the capture restriction parameter u. Considering a simple way, we use the relation and let For fixed and we need let the capture ratio of FM receivers of the system and for fixed we need let

We can also calculate the coefficients of variation of the packet delay and the packet interdeparture time of this capture system by using the analysis of probabilities of successful transmission given in this chapter and the analysis in Chapter 2.

Packet Delay Channel Utilization Average Packet Delay Packet Arrival Rate Slot Aloha
These keywords were added by machine and not by the authors. This process is experimental and the keywords may be updated as the learning algorithm improves.
This is a preview of subscription content, log in to check access.