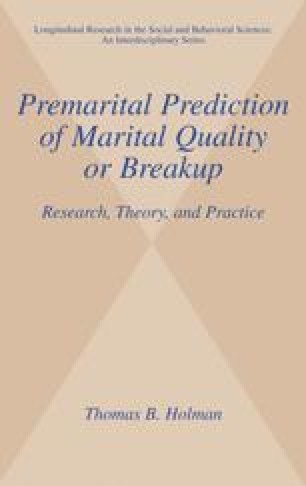 Chapter
Part of the Longitudinal Research in the Social and Behavioral Sciences: An Interdisciplinary Series book series (LRSB)

Relationship Quality Family Background Marital Satisfaction Marital Relationship Marital Quality
These keywords were added by machine and not by the authors. This process is experimental and the keywords may be updated as the learning algorithm improves.

Most hypotheses have not been tested in ways that might refute the theory or elaborate on basic propositions. Examination of mediation, moderation, or intervening mechanisms, for example, is rare, as is research that links variables from differenttheories or disciplines. Instead much of this research has been atheoretical, tending to examine idiosyncratic groups of variables for their direct effects on marital outcome at some later time... Consequently, the past 50 years have witnessed marital outcome, but not deeper in that the resulting findings have not advanced the field toward a more thorough explanation of marital development. Karney & Bradbury (1995, p. 22)