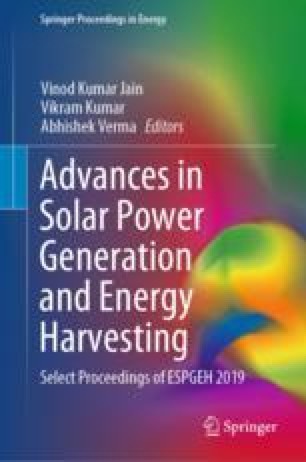 The energy generating modular array network is the costliest unit of solar photovoltaic systems. The amount of energy that is transformed into electricity by the solar photovoltaic panels depends on its tilt angle with the horizontal plane as well as the orientation of the module. The optimum tilt angle of these panels is decided on the basis of annual solar energy incident on the panels, and this angle is kept fixed during the year-round cycle. In this paper, we have investigated the optimum tilt angles determined on the basis of the amount of energy incident on the panels at yearly and seasonal basis. In this investigation, we have also investigated the shading effect of these panels on the rooftop at Delhi (latitude 28.7° N). In accordance with the latitude of Delhi, the solar radiation data has been classified into three seasons, i.e., summer (May, June, July, August), winter (November, December, January, February) and equinoxes (March, April, September, October). It is found that the panels placed facing due south and seasonally adjusted at their optimum tilt angles will produce more electrical energy, 6.52% in summer, 5.94% in winter and 5–7% more electrical energy on annual basis and a larger shadow in summer and smaller shadow in winter in comparison with the panels at annually fixed tilt angle, and this in turn will decrease the indoor solar heat flux in summer and enhance the indoor solar heat flux in winter and hence will favorably affect the indoor solar heat flux as well as load leveling.