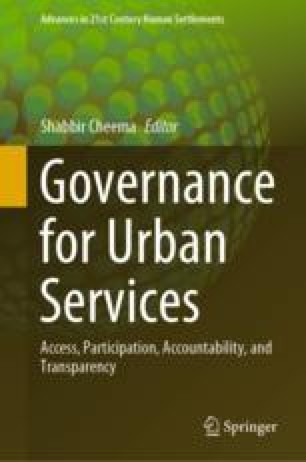 Political and Social Inclusion and Local Democracy in Indian Cities: Case Studies of Delhi and Bengaluru

Growth of slums, urban poverty and inequality, deteriorating quality of the urban environment, unplanned growth, rapid periurbanisation and growth of sprawls, and deficiencies in the coverage of basic urban services have plagued Indian urbanisation. Through micro-level surveys in select slums and squatters in Delhi and Bangalore, this study attempts to identify the structural and institutional barriers to full engagement of marginalized groups in processes and mechanisms of local democracy, including participation in community based organizations in the provision of basic urban services. Results indicate two prominent categories of exclusion, viz, institutional including housing, land and basic services and structural including barriers to participation of women in economic, social and political activities. These manifest in various forms of inadequacies for different vulnerable groups. To elucidate, the migrants, living mostly in rented accommodation, have lower coverage to basic amenities as compared to the non-migrants. Similarly, the condition of the scheduled population is poor as compared to non-scheduled population. The condition is also poor for the low-income households. The slum dwellers from both cities perceive that providing support to elderly and disabled population, women and child safety, improving connectivity to slums and developing infrastructure and community based preparedness for disaster should be on high priority for the government. The slum dwellers showed low faith in local government as compared to NGOs, in whom they have higher confidence. An integrated approach to urban planning and management with proper targeting of beneficiaries may ensure inclusion of the disadvantaged sections of the society.

The paper is based on a research funded by Swedish International Centre for Local Democracy project titled “Political and Social Inclusion and local democracy in Asian cities: Case of India”, and carried out by East West Centre in 2017 with data support from World Vision, India. The author is grateful to the research team for their contribution, especially Dr. Arvind Kumar Pandey, Ms. Pragya Sharma and Dr. Arpita Banerjee for their research support.