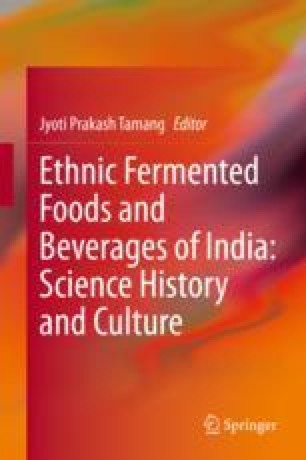 Ethnic Fermented Foods and Beverages of Bihar and Jharkhand

Bihar and Jharkhand are the two Indian states which were united until the year 2000. The food, culture and festivals among the people of these states are almost the same except those celebrated by tribal communities. Since both states come under rice-wheat cropping system, the staple food of the people is rice and wheat which cover the major proportion of the food products/dishes prepared at different occasions. The use of fermented foods has been preferred due to improved shelf life, better digestibility and palatability. Fermented foods like pua, jalebi, dhuska, kadhi badi, dahi vada, baskarel, etc. are prepared at different occasions. Products like jalebi and dhuska are commercially prepared by the rural people for sale, and these can be seen at different food stalls in the market. The popular beverage of tribal community of Jharkhand is Hadia prepared from rice or mahua. In Bihar, the consumption of toddy was popular among people of lower socio-economic status. But, after ban from Government of Bihar on use of alcoholic beverages, its consumption has drastically reduced. Since the people have the technique of preparation of these nutritious foods, the commercial production of these foods must be promoted under organized system giving them the employment and providing the common people the nutritious food.