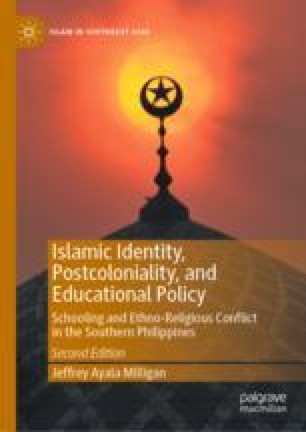 Drawing upon annual reports of the American government of the Moro Province and the Philippine Islands, contemporaneous press reports, and archival information in the United States and the Philippines, this chapter describes the policies, practices, and underlying ethos of American efforts to spread education in Muslim Mindanao. It identifies three colonial discourses—the pioneer discourse, the civilization discourse, and the infantalization discourse—that were deployed by American officials and observers to rationalize the occupation of Muslim Mindanao as an educational rather than colonial project and frame Muslim Filipino resistance as irrational opposition to civilization rather than an anti-colonial struggle. This framing of the Moro Problem as an educational problem, it argues, grew out of the recent US experience with African-Americans and Native Americans and set the pattern for future relations between non-Muslim and Muslim Filipinos in the postcolonial Philippine state.