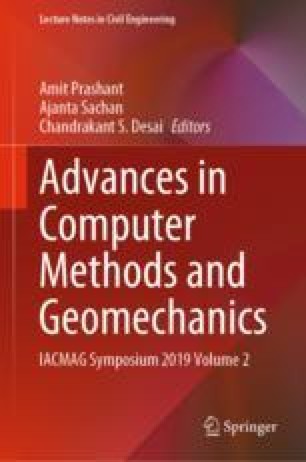 Advances in Computer Methods and Geomechanics pp 717-729 | Cite as

Gypsum rich soils, mostly found in arid regions of the world are known to pose and number of geotechnical engineering hazards, the most common one being collapse settlement. In this research, the influence of gypsum content on the shear strength and collapsibility of reconstituted gypsum sands was studied. Reconstituted specimens of gypsum and sand were prepared with varying amounts of gypsum by weight. Direct shear strength tests and single collapse potential tests were conducted on the soils. The study showed that both the angle of internal friction and collapse potential of the soils increased with increase in gypsum content. The addition of water to the specimens brought about a visible amount of cohesion to the specimens, which were otherwise mostly cohesionless when dried. Next, electrical resistivity testing was conducted on the gypsum sand specimens using the four-electrode box resistivity setup. The influence of gypsum content and volumetric moisture content on five specimens was studied and it was seen that resistivity increased with decrease in moisture, but it did not vary significantly with gypsum content. Pore-water resistivity measurements were made to using a conductivity meter. It was seen that, the presence of gypsum had a marked effect on pore-water resistivity but gypsum content itself did not have a major influence on resistivity. The resistivity measurements normalized with pore-water resistivity were then plotted and it was found that soil with no gypsum had a markedly different profile than those of gypsum sands. Regression models were developed to predict the volumetric water content for gypsum and non-gypsum sands.