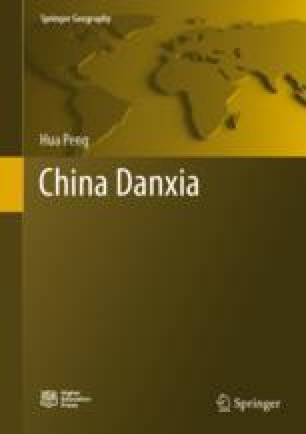 All the heritage sites are located on the South China Plate, formed by the collision of the China ancient plate and the Yangtze Plate in the Neoproterozoic, which became combined during the Silurian. South China, North China, Indo-China, and other neighboring continental segments were combined in the Triassic, forming a unified China continental plate. Since the Jurassic, the eastern part of South China was in an underthrust zone of the Pacific Plate, forming a NNE-oriented magma tectonically active zone. The eastern basins of red beds were strongly controlled by this structural zone. In the west of South China was the Qinghai–Tibet orogenic belt, formed between the China Plate and the Gangdise, Indian Plate which moved rapidly northward after the Late Jurassic. The foreland basins of red beds in the western part of the heritage sites (including the Sichuan Basin) were formed within this background of tectonic activity.