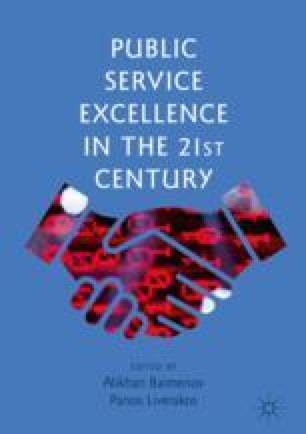 Japan’s Attempts to Digitalise Government: An Introduction of “My Number” System in Reforming Public Management

This chapter focuses on the Japanese attempt to digitalise government management. The case discussed is a mechanism commonly known as the “My Number” system, a Social Security and Tax Numbering system utilised in Japan. In the Japanese political and administrative context, the introduction of the “My Number” system is thought to be one of the steps to alleviate the current problem of harmonised information sharing among and between public agencies. Hence, the introduction of this system was part of the government’s efforts to reform and improve the quality of public management, as in the Japanese political environment the digitalisation of government has been an essential segment of administrative reform. It was also believed that the introduction of e-government and other digital tools would enhance transparency and accountability of public administration. Furthermore, it was also thought that digitalisation would help reduce the cost of running the government and the administration. Against this background, the chapter attempts to explore and examine the “My Number” system from three perspectives. First, it assesses the history of digitalisation attempts in Japan. Second, it examines several shortcomings inherent in the numbering system currently in place. And, third, it looks at the government system of personnel management, as the current system is considered an impediment in realising the digitalisation of government services and in improving the quality of public services provided. In sum, the chapter utilises the introduction of the “My Number” system in order to describe the problems that the central government bureaucracy has been facing in the era of digitalisation and the causes behind them.