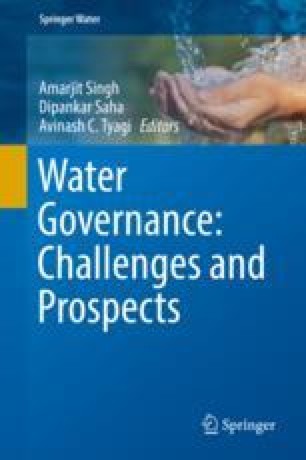 Civil Society in the Water Sector

Integrated river basin management approach is the need of the hour for equitable and efficient management and sustainable use of scarce water resources in the country. Integrated basin management is about integrating all sources of water, all water-using sectors, temporal and spatial integration, all stakeholders, relevant policy framework, legal and institutional framework, human and environmental needs, etc. It requires the participation of various stakeholders with competitive or supplementing interests such as up-stream down-stream users, various sectoral users, development and environmental needs and so on. It is important that the basin management approach actively involves all these stakeholders in the development and management of the river basin to meet the challenge of water and food security. Such a participation needs to be based on the well-informed debate at various levels. All the stakeholders whether governmental departments, non-government players, farmers, or common users need to be well informed. Civil society organizations, such as professional organizations, advocacy groups or academic institutions can play a crucial role in enabling active and effective participation of stakeholders.

The author is thankful to the management of International Commission on Irrigation and Drainage, New Delhi for permission to publish this article. Thanks are also due to my colleagues in the Ministry of Water Resources, Government of India, World Water Council and in Global Water Partnership who shared their experiences while working with civil society organizations.

One Drop project in Orissa, India, implemented over 4 years (2011–2014), attempts to carry out sustainable solutions to the problem of poverty through a WASH program designed and implemented by Gram Vikas through access to toilet, a bathing room and water availability 24/7. It draws inspiration from circus creativity by developing artistic activities firmly rooted in local culture to raise collective awareness, educate and mobilize the populations around WASH issues in order to inspire people and enable the process of social change. It involves more than 58,000 people of both genders, all ages and castes.

The behavioural change activities helped to raise communities’ awareness and understanding of the impacts of poor hygiene and generated a sense of empowerment for villagers who feel they are no longer beneficiaries but real participants in the project. Following the workshops, an improvement of the sanitation and hygiene behaviours could be witnessed in several villages where, for instance, women were no longer using the local stream to bathe and toilet use had increased. The entertaining nature of the artistic activities ensures the participation of all categories of people, effectively breaking the caste, class and gender divide. Finally, conflicts over water have decreased in some villages, demonstrating how social arts can generate engagement and alleviate social disparities.

Bangalore currently draws about 1400 million litres per day (MLD) of water from river Cauvery and meets just over half the city’s needs. The rest of the city’s water needs are drawn from fast-depleting groundwater resources, the quality of which is also deteriorating. The current metropolitan area of Bangalore (approx. 1400 sq. km.) had over 600 such lakes till about two decades ago, and these provided water for drinking, irrigation, horticulture and industrial activity. In addition, they served as important wetland habitats, especially to migratory waterfowl. Urbanization has caused serious damage to these lake systems in recent decades and contributed to deterioration and dislocation of lake communities that protected and maintained these commons. Today, with less than 450 lakes struggling to survive, contamination and encroachment are rampant leaving them in various stages of deterioration with debilitating impact on groundwater resources.

The Environment Support Group (ESG) has been addressing the issue for about a decade. ESG organized local communities and ran a series of campaigns for conservation of lake systems. The basic intention was to ensure that lakes remained as commons and that they were functional ecosystems that provided a variety of livelihood, cultural and social services. Law and policy was evolving to support the concept of lakes as commons.

The theme of reclaiming the commons evolved as an idea in peoples’ minds, and they began to see that a possible privatization of lakes would result in the exclusion of their access to them. Starting with small numbers of supportive people, the momentum grew, resulting in significantly large protests in 2007 and 2008 against lake privatization. The positive outcome of this was also that local communities began to step forward to secure their lakes which were being encroached and polluted.

ESG then moved the Karnataka High Court in a Public Interest Litigation (Writ Petition 817/2008) which resulted in two major reliefs: a status quo was ordered on the ongoing privatization of lakes and a committee involving nine agencies of the government officiated by a sitting Judge of the Court was constituted to develop a comprehensive plan and strategy to protect and conserve Bangalore’s lakes for posterity. The Court-Appointed Committee commenced its work in December 2010. As key petitioner and initiator of the idea, ESG was asked to assist the Committee in formulating the report. This was achieved in February 2011, and every public agency of the Committee arraigned for the tasks subscribed to the proposal. Under the direction of the Court on 3 March 2011, this document has become binding on the government.