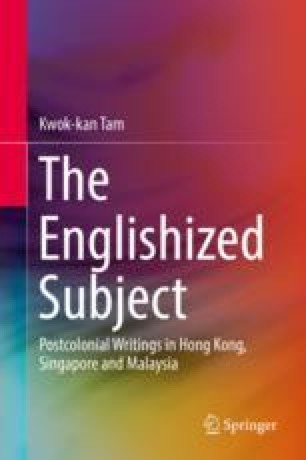 Englishization of Education and (Post/)Colonial Identity in Hong Kong

In his book The Location of Culture, Homi K. Bhabha raises the concept of the “unhomely” to understand the shift from the colonial condition and to the postcolonial in the process of identity formation (1994, 9). This is true in the experience of many postcolonial countries, but in Hong Kong the opposite seems to be more true in that the “homely” marks a transition from colonialism to postcolonialism since the 1970s. Hong Kong has been described by many historians as a “bridge” between China and the West, but since the 1970s Hong Kong has increasingly become a bridge that not only crosses but also gathers. Since the 1960s, the young people in Hong Kong, unlike the older generation, have begun to consider Hong Kong not as a place of transit in the process of migration from China but as their “home,” a place they are identified with (Chen 1972, 1). To be certain, this change in identification is closely related to the social changes in Hong Kong, in China, and in Southeast Asia, as well as in British colonialism. One visible change in Hong Kong in the 1970s was the rising status of Chinese as an official language. However, at the same time, the Chinese language, which is Cantonese in the case of Hong Kong, has not and is not meant to replace the English language in its social and commercial use. A stranger phenomenon in this change of Hong Kong people’s identity is that while the Chinese language has been recognized as an official language, there has been a growing tendency for secondary schools to adopt English as the medium of instruction (So 1992, 70). As we will also see, Cantonese songs have replaced English songs as pop songs in Hong Kong, but there is also a growing frequent use of English phrases in these Cantonese songs. What can satisfactorily explain these phenomena is that, as reflected in the ambiguous and mixed use of languages in Hong Kong, the new identity of Hong Kong is increasingly becoming a product of a hybrid culture.