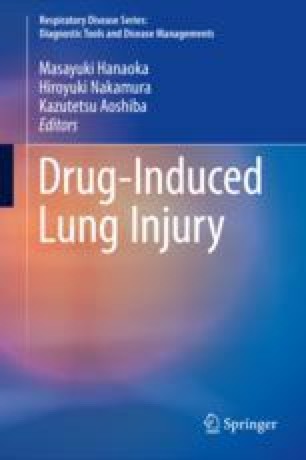 Therapeutic Strategies for DLI: How Should DLI Be Treated?

The lungs are vulnerable to toxins because of their large surface area and act as a metabolic site for some substances. Drugs may induce specific respiratory reactions, or the lungs may be affected as part of a generalized response. Drug-induced lung injury (DLI) can involve the airways, lung parenchyma, mediastinum, pleura, pulmonary vasculature, and/or the neuromuscular system. The most common form of DLI is drug-induced interstitial lung disease. There are no disease types specific to DLI, and DLIs are diagnosed on the basis of clinical findings, chest CT images, and histopathologic findings. The first principle of management of DLI is early detection and cessation of treatment with the suspected drug. Response to corticosteroid therapy depends on the histopathologic pattern of drug-induced interstitial lung disease. Prognosis depends on the specific drug and underlying clinical, physiologic, and pathologic severity of lung disease. To minimize DLI morbidity and mortality, all health-care providers should be familiar with the possible adverse effects of medications they prescribe. Individual variability in drug response is an important concern in clinical practice and drug development. Such variability is multifactorial and includes extrinsic factors such as environmental features and genetic and intrinsic factors that affect the pharmacokinetics and pharmacodynamics of drugs.

The number of drugs that cause lung disease will continue to increase with the development of new agents, such as biologics and immune checkpoint inhibitors [1, 2, 3, 4]. Drug-induced lung injuries (DLIs) can affect the airways, lung parenchyma, mediastinum, pleura, pulmonary vasculature, and/or neuromuscular system. The most common form of DLI is drug-induced interstitial lung disease (DILD). Orally and parenterally administered drugs are the most frequent causes of DLI; however, nebulized and intrathecal agents have also been implicated. DLI may result from a direct or indirect drug effect; direct effects may be idiosyncratic or caused by a toxic reaction to the drug or one of its metabolites.

Diagnosis of DLI is difficult because the clinical, radiologic, and histologic findings are nonspecific. The connection with drug use and the development of related inflammatory damage or idiosyncratic toxicities is hard to recognize and quantify, especially in patients using multiple drugs [5].

Representative drugs reported to cause DLIs are listed in Table 9.2 [7].
Table 9.2

DILD must be differentiated from diffuse lung diseases, including idiopathic interstitial pneumonias (IIPs), interstitial pneumonia associated with connective tissue disease, acute and chronic hypersensitivity pneumonia (HP), eosinophilic pneumonia (EP), acute lung injury (ALI)/acute respiratory distress syndrome, and Pneumocystis jiroveci pneumonia (PCP). However, it is particularly difficult to determine whether a new shadow detected in a diagnostic image of the lungs is attributable to primary disease or a drug.

Drug-induced EP is a collective term for diseases with respiratory manifestations—including dyspnea—that develop as a consequence of lung tissue damage caused by eosinophilic infiltration during drug treatment. Drugs that have been reported to induce EP include loxoprofen, acetylsalicylic acid, acetaminophen, MTX, penicillins, levofloxacin, phenytoin, imipramine, hydralazine, amiodarone, shosaikoto, and others [8, 9].

Drug-induced alveolar hemorrhage occasionally occurs during the use of antithrombotic drugs, such as anticoagulant, antiplatelet, and thrombolytic drugs, or as a complication of vasculitis related to antineutrophil cytoplasmic antibodies, which are typically present in patients treated with antithyroid drugs [16].

Drug-induced PH is reported to account for approximately 10% of all PAH cases and is induced by aminorex, cocaine, and methamphetamine, among other drugs [17].

Drug-induced pleural lesions are rare. To date, over 40 drugs have been reported to induce pleural lesions, including amiodarone, procarbazine, methotrexate, infliximab, etanercept, and others [18, 19].

9.3 Current Status of and Response to DLI Treatment

The first principle of management for DLIs is early detection and cessation of treatment with the suspected drug. The primary goal of treatment is suppression of the inflammatory response and prevention of lung fibrosis.

Acute episodes of DLIs usually resolve within 24–48 h after drug discontinuation, but chronic syndromes take longer. Because hypoxemia is common in DLIs, supplemental oxygen therapy is often provided. If a cytotoxic DLI is severe or appears to progress despite drug discontinuation, empirical administration of corticosteroids is advisable.

If continued treatment is necessary, the suspected drug should be replaced by a drug that is less likely to induce DLIs. Antineoplastic drugs therapy, however, should not be resumed until the injury has resolved. Recent evidence indicates that treatment approaches for everolimus- or temsirolimus-induced interstitial pulmonary disease and immune-related adverse events should be based on disease severity (Table 9.3) or grade (Table 9.4).
Table 9.3

Recent research on the side effects of the immune checkpoint inhibitor nivolumab showed that DILD was less frequent in patients with melanoma (approximately 2–5%) than in those with renal cancer or non-small cell lung cancer (NSCLC) (approximately 5%). Treatment-related deaths from DILD have been reported, and the frequencies of such deaths were similar in melanoma and NSCLC patients receiving pembrolizumab. Ipilimumab monotherapy results in pneumonitis in up to 5% of patients, although the percentages of patients with dyspnea and cough are higher. Combination administration of ipilimumab and nivolumab is associated with the highest rate of ILD (5–10% for any grade and 2% for grade 3/grade 4) [4, 20, 21, 22, 23, 24, 25, 26].

Observation and continued treatment with the suspected drug are acceptable for patients with asymptomatic DILD; however, development of symptoms warrants interruption of immune checkpoint delivery and initiation of corticosteroid treatment (Table 9.4).

Drugs can produce nearly all histopathologic patterns of interstitial pneumonia, including HP, OP, DAD, nonspecific interstitial pneumonia (NSIP), EP, pulmonary hemorrhage, and granulomatous pneumonitis. Most drugs in a comparable class induce a similar pattern of pulmonary involvement, which suggests a common cytopathic mechanism. However, some drugs produce more than one pattern of histopathologic involvement in the same patient. These reactions may be acute, subacute, or chronic (Table 9.2).

Treatment planning must carefully consider the severity of DLI and the morbidity associated with failure to treat the underlying disease. Alternative agents, if available, should be used. Because many patients with DILD are treated with immunosuppressive medications, which modestly increase the risk of infection, patients with DILD should receive the pneumococcal vaccine and yearly influenza virus vaccine. Furthermore, the incidence of tuberculosis is highly associated with antitumor necrosis factor monoclonal antibody therapy. The increased risk associated with early antitumor necrosis factor treatment and lack of an optimal chemopreventive treatment favor reactivation of latent tuberculosis.

Prognosis is favorable when acute DLIs are diagnosed early, and complete recovery can be expected in such cases. However, undiagnosed DLIs are associated with substantial morbidity and mortality. Prognosis depends on the specific drug and underlying clinical, physiologic, and pathologic severity of lung disease. Typical complications of DLIs are pulmonary fibrosis and respiratory failure requiring mechanical ventilation. Unfortunately, if the initial injury or abnormal repair of injury is not stopped, progressive tissue damage can lead to worsening physiologic impairment and even death.

The prognosis for DILD varies in relation to the frequency of the DAD pattern. Thus, it is important to determine whether the presenting DILD has a DAD pattern. Histopathologic examination is required for diagnosis. However, patients often present in serious condition, when it is difficult to perform a lung biopsy. In such cases, high-resolution CT is helpful in determining the DILD pattern. In general, the suspected drug should be immediately discontinued and re-administration avoided.

DLIs can involve the airways, lung parenchyma, mediastinum, pleura, pulmonary vasculature, and/or the neuromuscular system. The first principle of management of DLIs is early detection and cessation of treatment with the suspected drug. Response to corticosteroid therapy depends on the histopathologic pattern of DILD. Prognosis depends on the specific drug and underlying clinical, physiologic, and pathologic severity of lung disease. In addition, the clinical and radiographic features of DILD are often difficult to distinguish from those of other causes of DILD (e.g., infections, lung involvement of an underlying disease, pulmonary edema, connective tissue disease), and no signs, symptoms, or laboratory or radiologic findings are considered pathognomonic. Therefore, it is essential for physicians to be familiar with iatrogenic diseases that may affect their patients. In addition, clinical and genetic risk stratification may improve prevention of DILD in the future.