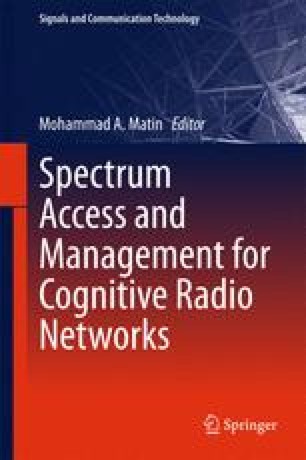 Spectrum Sensing for Half and Full-Duplex Cognitive Radio

Due to the increasing demand of wireless communication services and the limitation in the frequency resources, the Cognitive Radio (CR) has been initially proposed (Mitolal, IEEE Personal Commun 6:13–18, 1999 [1]) in order to solve the spectrum scarcity. CR distinguishes between two types of users, the Primary (PU) and the Secondary (SU) Users. PU has the legal right to use the spectrum bandwidth, while SU is an opportunistic user that can transmit on that bandwidth whenever it is vacant in order to avoid any interference with the signal of PU. Hence the detection of PU becomes a main priority for CR systems. The Spectrum Sensing is performed by CR to monitor PU activities. In actual CR systems (Yucek and Arslan, IEEE Commun Surv Tutorials 11:116–130, 2009 [2]), SU should stop transmitting while Spectrum Sensing is performed. The transmission of SU can be only resumed if PU is still absent. This procedure means that the CR can only operate in a Half-Duplex (HD) mode. Recently, many works have been proposed in order to attend the Full-Duplex (FD) mode. In other words, the Spectrum Sensing should be performed while SU is being active. Our work deals with the HD and FD of CR. First, we develop two Spectrum Sensing algorithms, based on the Cumulative Power Spectral Density (CPSD) of the received signal, dealing with the HD mode. These algorithms outperform the traditional Energy Detector (ED), the well known Cyclostationary Detector (CSD) based on the Generalized Likelihood Ratio Test (GLRT) and the Autocorrelation Detector (ACD). Furthermore, our algorithms are robust against the noise variance, so that the dependence on Noise Uncertainty (NU) presented in ED is avoided. In addition, the proposed algorithms are blind as they don’t require any prior information on the PU’s signal, contrary to Cyclostationary or Waveform detectors. Our algorithms make a decision on the PU presence by comparing the form of CPSD shape to curves depending on the CPSD of the noise. Two algorithms based on hard and soft cooperative schemes are introduced. In these algorithms, the spectrum is divided into two parts. The first part corresponds to negative frequencies, while the second part deals with the positive frequencies. Hence, two test statistics are evaluated, based on the CPSD of each of those two parts, and they are then combined according to the considered scheme. The False Alarm and Detection probabilities of the two proposed algorithms are evaluated analytically under Gaussian and Rayleigh fading channels. We examine our proposed detectors at a low Signal to Noise Ratio. The performance of our detectors is compared to that of ED, CSD and the ACD. Our detectors outperform ED, even at low oversampling rate, where CSD and ACD provide poor performance. Increasing the oversampling rate enhances the performance our algorithms as well as that of ACD and CSD. However, our algorithms remain better than ED, CSD and ACD for all tested values of oversampling rate. Furthermore, our detectors are less sensitive to NU than ED. Besides that, our detectors can be modified to become independent from noise variance and no longer affected by NU problem. The FD transceiver has been proposed to double the channel efficiency by transmitting and receiving in the same band at the same time. The main challenge in FD consists in minimizing the Residual Self Interference (RSI) which represents the error of the Self Interference Cancellation (SIC) and the receiver’s impairments mitigation such as the Non-Linear Distortion (NLD) of the receiver’s Low-Noise Amplifier (LNA). In CR, FD concerns the Secondary User (SU) who can transmit while sensing the channel. Since the SU should be aware of the Primary User (PU) activity, the RSI represents an important challenge for the SU. An ideal situation is achieved by SU when the RSI is totally eliminated, leading the SU to establish a Spectrum Sensing process equivalent to that of HD. In our work, we deal with this problem by analyzing, in the first stage, the impact of the RSI power on the detection process. For that objective, we derive a relation among the RSI power and the probabilities of detection and false alarm under HD and FD modes. To mitigate the NLD of LNA, we analyze the NLD impact on the channel estimation and the Spectrum Sensing Performance. After that, a novel method is proposed to suppress the NLD of LNA without affecting the channel estimation process. Furthermore, our proposed method outperforms significantly other methods proposed in the literature. In addition, using our method, the receiver requires only one training symbol period to perform the estimation of the channel and the NLD estimation. Our results show that an accurate mitigation of the NLD can be reached, which leads to an accurate channel estimation and to reduce the RSI power. Finally, Receiver Operating Characteristic (ROC) curves obtained in FD mode, after applying our method of NLD elimination, are very closed to those of HD mode.