The Role of the Highest Courts of the United States of America and South Africa, and the European Court of Justice in Foreign Affairs 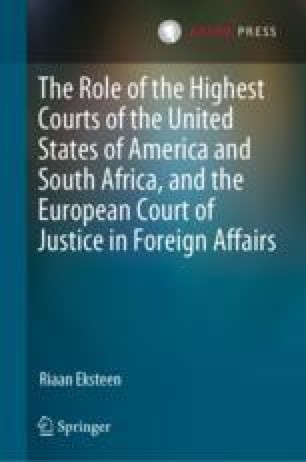 The Role of the Highest Courts of the United States of America and South Africa, and the European Court of Justice in Foreign Affairs pp 183-227 | Cite as

The original purpose of the Alien Tort Statute (ATS) of 1789 was primarily to remedy harms suffered by aliens at the hands of US citizens. For two ensuing centuries it remained dormant. Then it became a vehicle to advance human rights. Sosa was the first of three cases to enter the Court’s roll. It was in the period before 9/11. It was decided several years after new imperatives had changed the foreign policy landscape. SCOTUS was not in favour of expanding the scope of the ATS beyond its original meaning. The importance of the celebrated Kiobel case was the Court’s limitation on the application of the ATS. SCOTUS coined the term “touch and concern”. Only those with a nexus with the USA could pursue grievances. In enforcing the principle of presumption of extraterritoriality the Court refused to interpret the ATS as having any universal jurisdiction. Cases with foreign factors (plaintiffs, defendants, and locus) were now classified as “foreign-cubed” cases, not merely extraterritorial ones. The Jesner case brought clarity that foreigners could not sue foreign corporations under the ATS. RJR Nabisco was an unrelated human rights and ATS-focused case. SCOTUS’s ruling did, however, entrench the reach of the presumption against extraterritoriality. After the trilogy of ATS cases the statute has now lost its attractiveness for foreign plaintiffs wanting to engage the US judiciary in their efforts to settle human rights scores committed in faraway places with no element in the proceedings having a nexus with the USA.

Cite this chapter as:
Eksteen R. (2019) SCOTUS (Segment C). In: The Role of the Highest Courts of the United States of America and South Africa, and the European Court of Justice in Foreign Affairs. T.M.C. Asser Press, The Hague