Foreign Fighters under International Law and Beyond 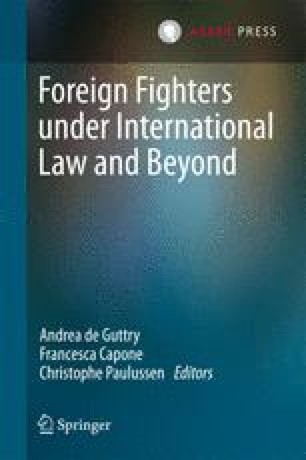 Foreign Fighters in the Syria and Iraq Conflict: Statistics and Characteristics of a Rapidly Growing Phenomenon

This chapter focuses on the statistics and characteristics of foreign fighters of all sides of the conflict in Syria and Iraq, and the reasons for this phenomenon as well as some general policy responses in the countries from which these fighters originate. First, the authors provide a short historical background of foreign fighters and a definition of the term, which is used throughout this book. Next, it describes the rapidly growing numbers and characteristics of these fighters in Syria and Iraq. Finally, adding up the various assessments, the authors arrive at a combined estimate of a total number of more than 30,000 foreign fighters of all sorts for the entire conflict in Syria and Iraq since 2011.

Prof. Dr. Edwin Bakker is Professor of (Counter-)Terrorism Studies at Leiden University, Director of the Centre for Terrorism and Counterterrorism (CTC) of that same university, and Fellow of the International Centre for Counter-Terrorism—The Hague.

Mark Singleton is the Director of the International Centre for Counter-Terrorism—The Hague.