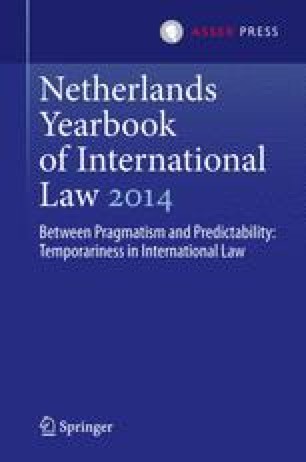 On 18 September 2013, a team of Greenpeace activists attempted to board the Prirazlomnaya oil platform, situated within the Russian exclusive economic zone, intending to disrupt drilling activities and raise awareness of Arctic environmental issues. This action resulted in the subsequent arrest of 30 individuals associated with the protest, as well as that of the Arctic Sunrise, a Greenpeace support vessel sailing under the Dutch flag. The plight of the so-called ‘Arctic 30’ dominated global headlines until their release under a general amnesty by Russia in December 2013. Meanwhile, the arrest of the vessel prompted the commencement of arbitral proceedings by the Netherlands against Russia, a process that had yet to be concluded at the time of writing. In November 2013, however, the International Tribunal for the Law of the Sea upheld a Dutch petition for provisional measures, including the release of the vessel and its crew subject to the payment of a bond. In so doing, the Tribunal faced the issue of non-participation by a respondent state for the first time, while also developing arguably a ‘back-door’ position on prompt release. In the meantime, aspects of the legality of environmental activism at sea remain somewhat uncertain which, given that a considerable number of protest vessels are registered to the Netherlands, may engage the litigative attention of the Dutch authorities in future incidents.