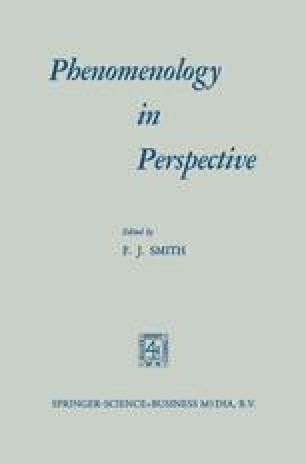 Phenomenology in Perspective pp 54-93 | Cite as

“Oυσíα and Γραµµή”: A Note to a Footnote in Being and Time

Heidegger’s “destruction” of classical ontology, pursued with the question of the meaning of Being in view, had for its first task the overthrow of the “ordinary concept” of time. This task formed a precondition for the analytic of Dasein, which is there through its openness to the question of the meaning of Being, that is, through its pre-comprehension of Being. Temporality constitutes “the being of a being-there (Dasein) which comprehends Being,” and is the “on-tological meaning of care” as the structure of Dasein. Consequently, the question of Being can be approached only through the horizon of time. The aim of Being and Time thus becomes clear; it is at once preliminary and urgent. Not only must there be an explicitation of temporality as seen in the traditional concepts underlying everyday language and the history of ontology from Aristotle to Bergson, but the possibility of this ordinary conceptuality must also be accounted for by recognizing in it a “rightful due.”1

Ordinary Concept Fundamental Ontology Pure Intuition Kantian Concept Dialectical Treatment
These keywords were added by machine and not by the authors. This process is experimental and the keywords may be updated as the learning algorithm improves.

Translated by Edward S. Casey (Yale University). This essay has appeared in French in L’endurance de la pensée (Paris, 1968) pp. 219–266. This translation is personally authorized by the author, and the translator had occasion to go over it with him.