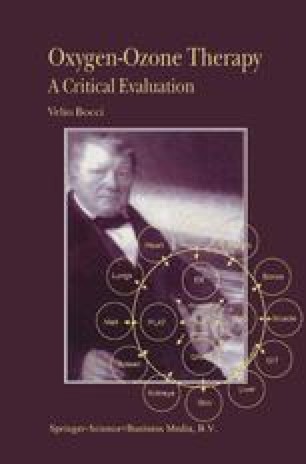 Is There Any Justification for Using Ozonetherapy in Human Pathologies Caused or Worsened by Free Radicals?

The involvement of Ros in several human diseases is widely accepted, although it remains uncertain whether increased Ros formation is the primary cause or an epiphenomenon that simply contributes to progression of the disease (Halliwell et al., 1992, 2000; Ames et al., 1993; McCall and Frei, 1999; Fukagawa, 1999). An example of the former possibility can be found in neurodegenerative processes where a defect of antioxidants appears to be the main culprit, such as a defective Sod in amyotrophic lateral sclerosis and Gsh in Parkinson’s disease (Jenner, 1994; Bondy, 1995; Simonian and Coyle, 1996; Rowland and Shneider, 2001; Ferri et al., 2001). On the other hand, viral infections, such as hepatitis C virus (Hcv) or human immunodeficiency virus (Hiv), begin with viral contamination; after the infection is established, the virus changes the cell environment to its advantage and by various mechanisms induces a persistent oxidative stress due to an imbalance between antioxidants and pro-oxidants in favour of the latter (Larrea et al., 1998). The etiology of autoimmune diseases (lupus erythematosus, rheumatoid arthritis, multiple sclerosis, diabetes, Crohn’s disease, etc.) remains undefined. However, it is likely due to a primary infection which, in a genetically predisposed individual, leads to a deranged immune response: an abnormal, cytotoxic T cell clone develops and, by recognizing an autoantigen on some cells, destroys them.

Amyotrophic Lateral Sclerosis Adult Respiratory Distress Syndrome Total Antioxidant Status Viral Contamination Main Culprit
These keywords were added by machine and not by the authors. This process is experimental and the keywords may be updated as the learning algorithm improves.

“It is better to stir up a question without deciding it, than to decide it without stirring it up “ Joseph Joubert

Cite this chapter as:
Bocci V. (2002) Is There Any Justification for Using Ozonetherapy in Human Pathologies Caused or Worsened by Free Radicals?. In: Oxygen-Ozone Therapy. Springer, Dordrecht