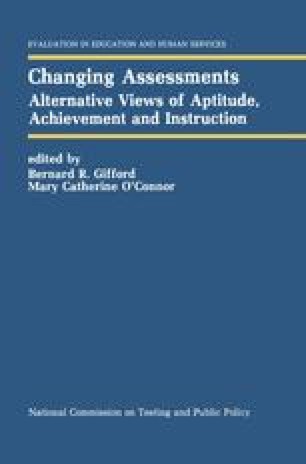 In America, educational reform and testing are intimately linked. Test scores signal the need for reform, as evidenced by the attention paid to declining scores on college entrance exams and standardized tests, to Americans’ weak performances on international comparisons, and to the percentages of students failing certain kinds of items on our national assessments. Tests are also widely viewed as instruments for educational improvement. Calls for better performance by American schools are almost always accompanied by increases in the amounts of testing done in the schools. New tests, or more active scrutiny of tests already in place, are frequently prescribed, both as a source of information for a concerned public and as a form of “quality control” and an incentive to better performance by educators and students. This link between testing and efforts at educational reform is not new—it has been a feature of efforts to improve American schools since at least the end of the nineteenth century (D. P. Resnick 1982). In each new round of reform, testing theory and practice have been refined and elaborated. Tests are so ubiquitous in this country’s educational life, however, and the test instruments we use are often so technically elegant, that it is difficult to imagine proceeding in a different way. Complaints about testing and tests, from those who claim that tests block opportunities for certain social groups and those who point to the limited range of human competence assessed by the tests, bubble up whenever the amount and visibility of testing increase. These complaints sometimes lead to modifications of tests, but there is rarely sustained or widespread consideration of the possibility that the very idea of using test technology as it has developed over the past century may be inimical to the real goals of educational reform.

Reading Comprehension Performance Assessment Steel Ball Ball Bearing Educational Reform
These keywords were added by machine and not by the authors. This process is experimental and the keywords may be updated as the learning algorithm improves.

We wish to thank Allan Collins, Lee Cronbach, John Frederiksen, Robert Glaser, and Loretta Shepard for their critical comments on an earlier draft of this chapter.