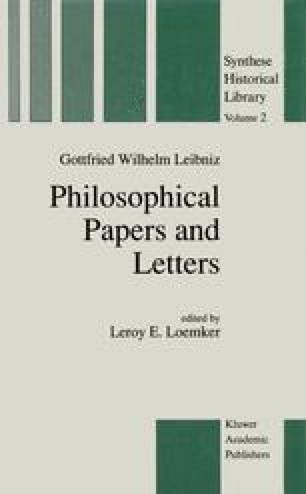 Reflections on the Common Concept of Justice

Though conclusive evidence for the date of this work, in French, is lacking, it is obviously in Leibniz’s courtly style, and the allusion to the three queens (p. 570) in whom the Electress Sophia was directly interested suggests that it was written for her at some time between the determination of the Hanoverian succession to the English throne and the death of the Queen of Prussia in 1705. Not only is it a clear development of Leibniz’s theory of justice and its application to government, but it contains clues to his theory of values, proposals for scientific co-operation, and a popular statement of his theodicy. His indictment of slavery is more vigorous than in No. 44, IV, and earlier writings, and Whig principles find expression in his justification of the people’s right to resist the sovereign in extraordinary cases.

Distributive Justice Great Good Formal Reason Philosophical Paper Great Evil
These keywords were added by machine and not by the authors. This process is experimental and the keywords may be updated as the learning algorithm improves.
This is a preview of subscription content, log in to check access.

Cite this chapter as:
Leibniz G.W. (1989) Reflections on the Common Concept of Justice. In: Loemker L.E. (eds) Philosophical Papers and Letters. The New Synthese Historical Library (Texts and Studies in the History of Philosophy), vol 2. Springer, Dordrecht