Radiology of Influenza A (H1N1) 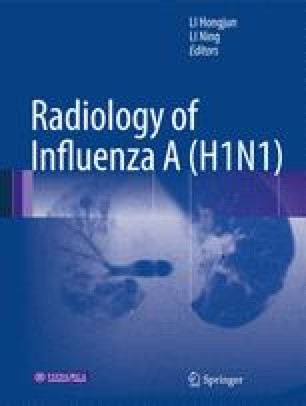 The incubation period after infection of Influenza A(H1N1) is usually 1–7 days, being longer than common influenza and bird flu.

Acute Respiratory Distress Syndrome Severe Acute Respiratory Syndrome Sore Throat Severe Pneumonia Bacterial Pneumonia
These keywords were added by machine and not by the authors. This process is experimental and the keywords may be updated as the learning algorithm improves.
Download chapter PDF

The incubation period after infection of Influenza A (H1N1) is usually 1–7 days, being longer than common influenza and bird flu.

After the infection of Influenza A (H1N1) virus, the clinical symptoms range from no fever and mild symptoms of upper respiratory infection to severe or fatal pneumonia. Most patients suffering from Influenza A (H1N1) have typical flu-like symptoms, being capable of spontaneous recovery. The most common symptoms include coughing, fever, sore throat, headache and upset. Some out-patients may not be found feverish, and about 38 % American out-patients have gastrointestinal symptoms, including nausea, vomiting and/or diarrhea.

Almost half of the hospitalized patients in the US and 46 % Mexican death cases were found underlying conditions including pregnancy, asthma, other pulmonary diseases, diabetes, obesity, autoimmune diseases treated with immunosuppressive therapy, neurological diseases and cardiovascular diseases. Among 30 hospitalized patients in California of the US, 64 % had background diseases.

Among 45 death cases in Mexico, 54 % were healthy, mostly aged 20–59 years [1, 2]. Adults had a higher mortality rate than children and teenagers. Death usually occurred due to the rapid development of respiratory conditions. In Mexico, the period from the onset of disease to hospitalization was averagely 6 days (ranging from 1 to 20 days), but a mean of 4 days in the US. The clinical manifestations of the death cases were fever, tachypnea, myalgia, tachycardia, low oxygen saturation and occasional hypotension and cyanosis. The severe cases had cardiac arrest in a short period after hospitalization.

In Mexico, chest X-ray of patients with severe pneumonia demonstrated multifocal infiltration. The condition might rapidly develop into acute respiratory distress syndrome (ARDS), renal or multiple-organ failure [3, 4, 5, 6]. The median period from the onset of the disease to death was about 10 days, ranging from 2 to 23 days. Among the hospitalized patients in California, 60 % (15/25) were radiologically diagnosed as having pneumonia.

The early symptoms of Influenza A (H1N1) are similar to common human influenza, including fever, cough, sore throat, somatic pain, headache, chills, and fatigue. Some patients may have diarrhea/vomiting, muscle pain/fatigue and redness of eyes.

The symptoms may deteriorate rapidly, being sudden and severe. The severe symptoms include sudden high fever over 39 °C, even with secondary complications of severe pneumonia, ARDS, pneumorrhagia, pleural effusion, pancytopenia, renal failure, sepsis, shock and Reye syndrome, respiratory failure and multiple organs failure to cause death. The patients’ background diseases may deteriorate [7, 8, 9, 10, 11].

The abnormal signs of lungs are not obvious. Some patients may be found moist rale or pulmonary parenchymal changes.

For most patients with Influenza A (H1N1), recovery usually can be achieved within a week after positive treatment by clinical physicians. And for some patients, the clinical course may be longer.

Clinical data indicated that the mortality rate of patients with Influenza A (H1N1) is about 6 % and the cause of death is commonly severe secondary complications. The period from the onset of symptoms to death is averagely 9 days, but the mortality rate is lower than those of bird flu and severe acute respiratory syndrome (SARS).