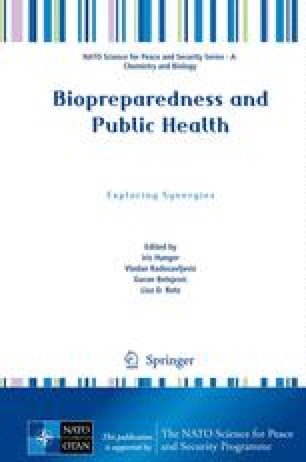 Conference paper
Part of the NATO Science for Peace and Security Series A: Chemistry and Biology book series (NAPSA)

Biological terrorism and the need for biological defence is a relatively new concept for Greece. Although defence against weaponized pathogens was part of CBRN training in the military, it was the 9/11 massacre followed by the anthrax letters horror that triggered a more active involvement of the Greek public health sector. In that historical moment a third bullet was added to the already existing disease outbreak classification – naturally, accidental and now deliberate. These incidents and the subsequent 2004 Olympic Games in Athens drove the Greek government to focus on biodefence and revise existing civil emergency planning by inclusion of new emerging threats.

Olympic Game Syndromic Surveillance Whooping Cough Public Health Strategy Biological Weapon
These keywords were added by machine and not by the authors. This process is experimental and the keywords may be updated as the learning algorithm improves.
Download conference paper PDF

Naturally occurring or accidental outbreaks of a disease usually take place in both urban and country environments. Big cities are usually the targets of bioterrorism due to the high density of population resulting in both physical and psychological casualties.

If the disease does not start from one’s own country then early warning might be possible, leading to preventive measures all the way from the borders into the community. The H1N1 virus pandemic is an example of this globalization of medical information that is useful to both countries and citizens.

One important parameter of the epidemiology of infectious diseases is the movement of the populace either for professional, recreational or immigration reasons. In the past, moving from one location to another, even within the same country borders, took considerable time. In modern times, usually less than 24 h is needed to cross the world. We witnessed the contribution of faster travel to the spread of disease recently during the 2010 flu pandemic. Apart from the legal movement of a population, mass illegal immigration also poses a significant problem in certain parts of the world – e.g. in Greece – in relation to the spread of a disease or re-emergence of old diseases like malaria or tuberculosis. The geographical location of Greece and its porous borders due to the significant coastline make it an attractive destination for those seeking a better living environment or as a way to enter other EU countries as a final destination.

Greece receives a considerable number of tourists annually that exceeds its own population. Greeks also travel globally for the reasons mentioned above. This constant movement of a populace makes epidemiologic surveillance and disease prevention extremely difficult.

The reality of disease transmission as a result of immigration and travel is reflected below in the results from the Hellenic Centre for Disease Control and Prevention (CDCP) [2] and various relevant NGOs addressing the health status of immigrants and transmission of old and new infectious diseases. The percentage of declared cases of specific diseases attributed to Greek citizens and immigrants is shown in Table 11.1.
Table 11.1

Distribution of specific diseases in Greek citizens and immigrants (2010)

11.3 Bioterrorism as a Potential Threat

Timely information is crucial when it comes to a natural or accidental outbreak of a disease. This information might be beneficial to laboratory or institution workers or the population that needs to be protected. Of course, in most cases, basic hygiene measures (personal or collective, at home or in a wider infrastructure such as schools) can prevent these diseases.

Defence against a deliberate outbreak of a disease requires intelligence. This type of medical intelligence is attributed to national intelligence service both civilian and military. Usually international collaboration is mandatory when weaponized pathogens are the problem.

Risk identification and assessment contribute to national defence as well. It is a continuous process dealing with both the deliberate and non-deliberate forms of disease outbreaks. Internal (sanitary institutions, police reports, etc.) and external (neighboring countries, World Health Organization, EU public health surveillance systems, etc.) hints can assist experts to perform a risk assessment leading to an alert of the public health system.

Current geopolitical instability and turmoil in our own region combined with the existing direct and indirect, overt and covert threats against Western societies make bioterrorism attacks a potential risk.

Production of biological weapons is both easy and cost effective. Of course we must discriminate between the production and weaponization of pathogens that is not as easy and needs specialized equipment. Pathogen production does not require large factories and existing facilities in commercial infrastructure (food industry, drug industry) can be used for this purpose. On a smaller scale, pathogens can be cultivated in small laboratories or mobile caravans similar to those used to produce illegal drugs. Identification of such illegal laboratories is very difficult. Viral pathogens are more difficult to produce as compared to bacteria and also need some extra precautions and equipment.

Large quantities of biological weapons can still be produced in a short period of time (days or weeks) in small laboratories. According to Kathleen C. Bailey, former Assistant Director, Office for Disarmament and Armaments Control, who visited many biotechnology and pharmacology companies, a complete biolab requires no more than a room of 4.5 m  ×  4.5 m and a budget of USD 15,000 for supplies [1]. In such a room, trillions of bacteria can be quickly produced with low risk and with minimum personal protection equipment such as a gas mask and a plastic suit over clothing.

Difficulties relevant to the production of biological weapons include:

11.4 Preparedness and Response to Health Emergencies in Greece

Key stakeholders in public health preparedness and response systems are:

Epidemiologic monitoring is the systematic and continuous collection, analysis and interpretation of sanitary/medical information relevant to public health.

11.4.2 Analysis of the Different Types of Epidemiologic Monitoring Systems

The system of mandatory reporting of diseases represents the basis of epidemiologic monitoring in most countries; usually it is supplemented by more specialized systems, networks or studies with specific objectives.

The objectives of this system are:

Mandatory disease reporting systems intensified during the 2003–2004 period. During that time a complete revision of the 45 supervised diseases took place along with complete reformation of CDCP’s databases aiming to reinforce a reliable system of mandatory reporting during the Olympic Games in Athens (2004). The Epidemiologic Monitoring and Intervention Division of CDCP was fully reformed to comply with the European Network of Epidemiologic Surveillance.

11.4.3 Categorization of Diseases of Mandatory Reporting

The reporting process can start from the clinical or laboratory doctor or the hospital’s infectious diseases nurse but has to be sent immediately (by fax) to the Regional Health Directorates and CDCP.

2003: “Organization and modernization of public health services and other provisions”, Art. 8, Law 3172/6-8-2003: epidemiologic monitoring of pestiferous diseases is practiced and coordinated by CDCP.

2003: “Regulations applied for regional systems of health and providence”, Art. 44, Law 3204/23-12-2003: CDCP – each private or public medical institution or individual doctor, operating legally, is obliged to inform CDCP of each case of pestiferous disease that comes to his/her attention.

This system was set in operation in 1999 and revised in September 2004. It deals with common diseases with minor indications (usually). Its scope is to support the health system through data gathering and processing, to make a clear estimate of diachronic trends and detect a possible epidemic elevation in an area or region.

A large number of selected primary care doctors participate in this system/programme. These doctors are distributed all over the country in the following networks:

Laboratory reporting is an additional source of information. The objectives of this system are to provide health directorates a clear estimate of general tendencies over the years and provide them with the capability of detecting an epidemic elevation in the region.

Chosen laboratories with a suitable geographic distribution participate in the system/programme.

Prerequisites for the optimal function of the system include:

This system is activated in special conditions or when there is a specific objective. It applies to the reporting of predetermined clinical conditions (“syndromes”) and not diagnosed diseases (e.g. “respiratory infection with fever” instead of “pneumonia from pneumococci”).

Syndromic surveillance applies to the system of illness observers, early detection of epidemic elevations or individual incidents with public health importance (e.g. Olympic Games 2004) and in the case of a known epidemic (e.g. SARS).

Syndromes that are supervised with syndromic surveillance include:

These networks focus on:

11.5 Military and Civilian agencies’ Contribution in Preparedness and Response Against Natural or Deliberate Health Emergencies in Greece

All public sector services, in the case of a suspected or confirmed biological incident – deliberate or not – that needs to be treated, alert the Civil Protection Operations’ Centre of GSCP.

GSCP’s representative coordinates the functions of the CMT through telephone or video conference. After the thorough evaluation of the severity of the incident and the classification with different color codes if necessary, CMT will conduct a meeting at the GSCP building for better coordination of the operation.

When an initial estimation has been made, medical directorates in various/all regions of the country are informed and guidelines are issued. Medical directorates are obliged to report immediately to the GSCP about any laboratory result following citizens’ examinations and inform the public according to the guidelines of GSCP.

Different missions are given to Police and Fire Service depending on the incident’s nature.

In case of a CBRN agent release, Hellenic National Defence General Staff activates its Special Joint CBRN Company which has the capability to be airborne and deploy anywhere in Greece within 4 h (maximum), to conduct a CBRN search, survey, identification, sampling, decontamination, and provide specialized first aid. For bioterrorism agents, this company has the capability to operate portable biological detectors that can identify pathogens of special interest, such as those causing anthrax or plague, within 30 min (up to 28 biological samples can be processed simultaneously).

The Platoon was established after the 2004 Olympic Games by merging the two specialized units (one field unit operating in both hot and warm zones and one hospital-based unit deployed at the Army General Hospital of Athens) that were created and deployed during the Games in support of first responders.