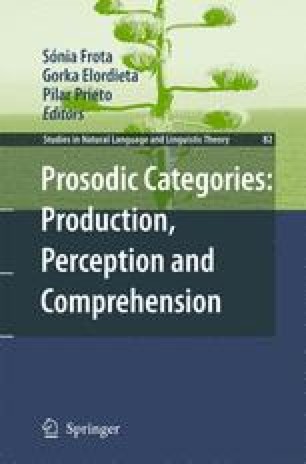 Tonal and Non-Tonal Intonation in Shekgalagari

Besides the TIE3 conference, the first author presented this paper as colloquia at the University of California, Berkeley and M.I.T. We are grateful for the comments we received at all three presentations and individually, particularly from Carlos Gussenhoven and Keith Johnson, as well as from the editors and two anonymous reviewers. The second author was supported by a Fulbright Fellowship which allowed her to spend the 2007–2008 academic year at UC Berkeley.

As was seen in (24), declarative PLL does not apply when the last word of the utterance is monosyllabic, a property which is thus far limited to Shekgalagari among the Bantu languages for which we have information. Here we consider a few more facts in order to determine how this fact might be account for.

First, it should be noted that monosyllabic words are very limited in Shekgalagari. Among the ones we have identified by independent criteria are the following:
As seen, all of the above monosyllabic words have /H/ tone. Monosyllabic imperatives have a bisyllabic variant, which can occur with Emph PLL: i :-k-á ‘mention!’, i :-gy-á  ‘eat!’. Similarly, although monosyllabic words block declarative PLL, Emph PLL may assign length to the final vowel of the preceding word:

But should utterance-level intonation, here PLL, be allowed to have access to word boundaries? If yes, monosyllabic words can block PLL by virtue of not having a penultimate syllable. If no, an alternative is needed to avoid direct reference to word boundaries.

While we suspect that intonation can know where the word boundaries are, if it were necessary to exclude them from intonational implementation, the following metrical solution would work: