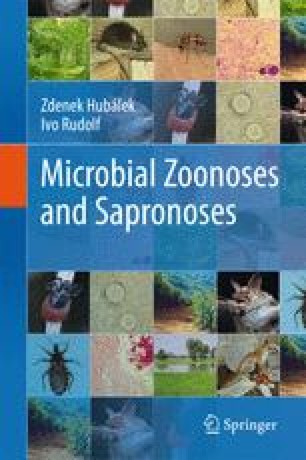 Types of Human Disease by Source of the Infectious Agent

In general, the source of infection for human beings is another human, or an animal, or the environment (extra-animal substrate). In line with this we can distinguish human infectious diseases as anthroponoses, zoonoses and sapronoses, respectively.

Herpes Zoster Neisseria Gonorrhoeae Bacillary Dysentery Scrub Typhus Bordetella Pertussis
These keywords were added by machine and not by the authors. This process is experimental and the keywords may be updated as the learning algorithm improves.
Download chapter PDF
In general, the source of infection for human beings is another human, or an animal, or the environment (extra-animal substrate). In line with this we can distinguish human infectious diseases as anthroponoses, zoonoses and sapronoses, respectively. The names have been derived from the Greek “νόσος” (nosos) = disease; “ανθρόπος” (anthropos) = man; “ζωός” (zoos) = living (animal); “σαπρός” (sapros) = decayed.

Zoonoses are diseases transmissible from animal to man. The term was invented by Rudolf Virchow during his study of trichinellosis in 1855. In general, zoonoses are not transmissible by contact from the patient to other people, although there are notable exceptions with haemorrhagic fevers Lassa, Machupo, Ebola, Marburg, CCHF, or SARS, plague etc. The term used earlier for diseases transmissible from animals to man was “anthropo-zoonoses”. By analogy, a term “zoo-anthroponoses” was used for diseases transmissible the other way, from man to animals; however the number of the latter is limited (e.g., influenza, tuberculosis). Regrettably, many epidemiologists started to use these both terms in a reverse order (zooanthroponoses as diseases transmissible from animals to man), or promiscuously. The WHO therefore suggested using “zoonoses” as the official term, and that the two previous terms should no longer be used. According to an expert commission of WHO/FAO the definition of zoonoses reads as follows: “Zoonoses are diseases and infections which are naturally transmitted between vertebrate animals and man” (WHO Tech Rep Ser 169, 1959). This definition was confirmed also by the third and fourth report of this Commission (WHO Tech Rep Ser 378, 1967; WHO Tech Rep Ser 682, 1982).

The number of known zoonoses is growing steadily, at present exceeding 250, about 80 of which are common. From the zoonoses discovered in recent decades we can mention for instance Lyme borreliosis, anaplasmosis, HFRS and other haemorrhagic fevers Lassa, Marburg and Ebola, hantavirus pulmonary syndrome, SARS or Nipah fever. However (and luckily), only a limited number of zoonoses can cause extensive outbreaks – e.g., salmonellosis, Q fever, yellow fever, Japanese encephalitis, West Nile fever, chikungunya, RVF and American equine encephalomyelitides. Other zoonoses attract public (and media) attention due to their high lethality, sometimes associated with a high contagiosity for attending medical personnel (haemorrhagic fevers).

The transmission of zoonotic agents from animal to man can be realized either directly, or indirectly, via a vector (usually a haematophagous, i.e. blood-feeding member of the phyllum Arthropoda); in the latter case we can speak about obligate or facultative vector transmission (so-called “meta-zoonosis” according to WHO 1967).

Zoonoses can further be divided according to the habitat or ecosystem where their agents circulate as: (i) synanthropic, with an urban (anthroponotic, domestic) cycle where the source of human infection are most often domestic animal or synanthropic vertebrates bound to human dwellings; or (ii) exoanthropic, with a sylvatic (feral) cycle, and their reservoir is in the countryside outside human dwellings – in so-called natural foci. The first group of zoonoses forms, e.g., vesicular stomatitis, brucellosis, bovine tuberculosis, glanders, listeriosis, erysipeloid or ringworm caused by Trichophyton verrucosum and Microsporum canis. These diseases are transmissible usually percutaneously, aerogenically, alimentarily or per conjunctiva, and often present typical occupational diseases in farmers, butchers and veterinary doctors. The second group form classic diseases with natural focality in the sense of J. N. Pavlovsky, e.g. tick-borne encephalitis and other arboviroses, tularaemia, plague or scrub typhus, where man acquires the infectious agent after entering a natural focus, commonly by the attack of an haematophagous vector. However, there does not exist a clear distinction between these two groups of zoonoses, and a number of zoonoses exhibit both urban and sylvatic patterns of circulation – yellow fever, American trypanosomiasis, plague.

Sapronoses are diseases transmissible to man from an abiotic substrate in the environment – soil, water, decaying plants, animal excrement, carrion and other substrata. The most important feature is that the sapronotic agent replicates actively in these abiotic substrata – it is not the mere persistence of the microbe in the environment, nor secondary contamination of environmental objects with the agent from animal sources. The source of infection is therefore not an animal or man. Sapronotic agents are capable of reproduction both in abiotic environment (saprophytic phase) and in the organisms of homoiothermous vertebrates including man (parasitic phase). They show a “dual life”: saprophytic and parasitic (pathogenic). In particular, many human mycoses belong to sapronoses, especially visceral ones, like coccidioidomycosis, histoplasmosis, blastomycosis, emmonsiosis, cryptococcosis, and also some bacterial (legionellosis) and protozoan (primary amoebic meningoencephalitis, naegleriosis) diseases, but no viral, rickettsial or chlamydial diseases (because obligate intracellular parasites are unable to reproduce extracelullarly).

The term “sapronosis” and its definition were introduced into epidemiology by Russian microbiologist V. I. Terskikh (1958) in the article entitled “On diseases of humans and animals caused by microbes capable of reproduction in external milieu …”, and for further use it was accepted by Somov and Litvin (1988), Krauss et al. (1997), Hubálek (2003) and others. The definition of sapronoses reads after Krauss et al. (1997): Krankheiten, deren Erreger keine Wirbeltiere als Reservoir erfordern, weil sie in Wasser, Boden, auf Pflanzen usw. vorkommen und von dort aus auch Vertebraten infizieren können.

The difference between zoonoses and sapronoses is sometimes fuzzy to vague, and a disease can be called, depending on circumstances, either zoonosis or sapronosis (e.g., listeriosis, pseudotuberculosis, anthrax).

A characteristic feature of a majority of zoonoses and sapronoses is that man is a dead-end host in the epidemic process (inter-human transmission is absent), although his or her disease can often be serious, even fatal. The pathogenic agent is evolutionarily not adapted to its accidental new host. From an ecological point of view, all pathogenic microorganisms are parasites of their hosts (animals or plants). The evolution of parasitism in today’s pathogens proceeded along the trajectory saprophyte (commensal) → facultative (occasional) parasite → obligate parasite. An obligate parasite as a rule does not kill its host on which it is evolutionarily adapted (the untimely death of the host would lead to a bad fate for it), while unusual, incidental but susceptible hosts (man in our case) where parasitic co-evolution has not occurred can be severely harmed or killed.

Classification of infectious diseases into anthroponoses, zoonoses and sapronoses is a combination of an anthropocentric view (i.e. treating only diseases of humans, while not those of animals) and ecological view (studying the habitats in which the infectious agent lives: Hubálek 2002).

We can distinguish six classes of zoonoses and sapronoses according to systematic arrangement of their aetiological agents:

However, we will concentrate on microbial zoonoses and sapronoses in this monograph, leaving aside diseases caused by multicellular organisms (helminths and arthropods, i.e. invasions and infestations). The agents of the classes IV–VI belong to the field of parasitology, and cause the so-called parasitic zoonoses and sapronoses.

Cite this chapter as:
Hubálek Z., Rudolf I. (2010) Types of Human Disease by Source of the Infectious Agent. In: Microbial Zoonoses and Sapronoses. Springer, Dordrecht